March 26, 2017
OTTAWA, Canada -- We recently announced that the government of Canada’s military training mission in Ukraine, Operation UNIFIER, will continue for another two years. 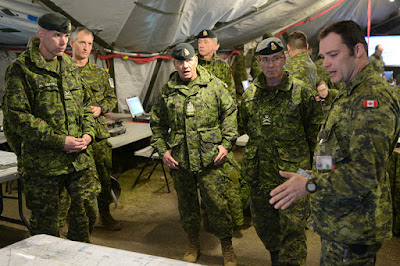 By renewing this mission, we not only continue to build upon the strong economic, social, military and cultural ties between Canada and Ukraine, but we publicly send a message of deterrence to Russia.

Canada is proud to continue to be at the forefront of the international community’s support to the people of Ukraine as they strive for security, sovereignty and stability.

Over the past year, Canadian Armed Forces members deployed on Op UNIFIER have focused on transferring professional soldier skills to members of the Ukrainian Armed Forces.

We are pleased that these training efforts will continue.

Earlier this year, our government announced the appointment of Jill Sinclair to Ukraine’s Defense Reform Advisory Board.

Ms. Sinclair is a distinguished public servant with experience in foreign affairs and defense, and she is making a valuable contribution to the Ukrainian defense reform process.

We stand with Ukraine now and into the future.

Since 2014, Canada has participated alongside our NATO allies in efforts to maintain security and stability in Central and Eastern Europe.

We send a strong message of deterrence to Russia by continuing our military training in Ukraine, through our air policing in Romania, our frigate in the Black Sea, and our recently announced Canadian-led NATO battlegroup in Latvia.

Canada’s long-standing and resolute commitment to the people of Ukraine was highlighted during Prime Minister Justin Trudeau’s visit last year, when our two countries signed a landmark free-trade agreement.

We look forward to meeting with Minister Stepan Poltorak to sign the Defense Cooperation Agreement between our two nations.

Military assistance is part of Canada’s whole of government support for Ukraine, which includes development and humanitarian assistance, bilateral trade, and military and defense cooperation.

Additionally, the partnership between our militaries has further strengthened the wonderful relationship our two nations share.

We are thankful for the warm welcome Canadians receive whenever they visit Ukraine, and want to thank the people of Ukraine for the kindness and hospitality they continue to show to our soldiers.

Canada is determined to support the people of Ukraine as they build a more secure, stable and prosperous country.