November 13, 2016
CHERNOBYL, Ukraine -- The work to install a giant shield over the Chernobyl nuclear disaster site in Ukraine began Monday in an effort to block radioactive material from leaking out over the next several decades. 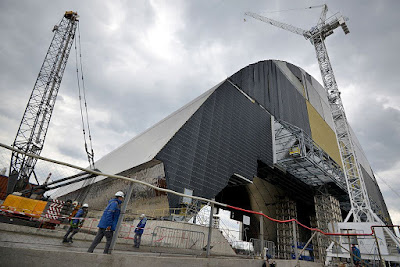 The installation of the shield is planned to complete on Nov. 29 at a total cost of $1.6 billion, the AFP news agency reports.

The European Bank for Reconstruction and Development is the main sponsor of the project to slide in the arch shield, called the New Safe Confinement, made of concrete and steel, according to the BBC.

Once complete, the arch will block the remains of reactor four at the Chernobyl nuclear power plant, which exploded in 1986, killing 30 people and affecting thousands with radiation poisoning.

“The start of the sliding of the arch over Reactor 4 at the Chernobyl nuclear power plant is the beginning of the end of a 30-year long fight with the consequences of the 1986 accident,” Ukraine’s Environment Minister Ostap Semerak said, according to the AFP.

ggggfdgdfg said…
If this week’s PGA Championship is anything like the other majors this season, it will be one of the most-watched PGA Championships in recent memory. Much of that can be attributed to the return of Tiger Woods.

Whether it’s Woods, Rory McIlroy, Jordan Spieth or another reason that has you tuning in for the event, there will be no shortage on places your can view it. As far as online streaming goes, there will be featured group coverage provided by the event and Turner and CBS, which owns the rights to broadcast the tournament. (Look for Woods to be in one of those featured groups. He has been most of the season.)

Check out the schedule below for all your streaming needs, which can be found on PGA.com and the PGA Championship mobile app. (All times ET.)