Inside The World Of Women Warriors

November 06, 2016
KIEV, Ukraine -- Lera Burlakova first traveled to eastern Ukraine’s Donbass region in 2014 as a journalist to report on the violence between the Ukrainian military and pro-Russian separatist forces. 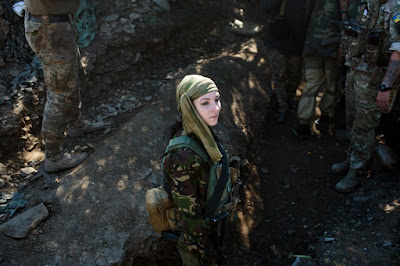 Nika, 24, a sniper for the Ukrainian army, on the Bakhmut front lines in eastern Ukraine.

After a week of covering the war in the town of Pisky, Burlakova decided writing about it was not enough: She wanted to fight for her country.

“I came back to Kiev for three days, quit my job and returned to Pisky as a soldier.”

Almost three years later, Burlakova is an experienced veteran in a war that has led to the deaths of more than 10,000 people, including civilians, Ukrainian troops, separatists, Russian servicemen and members of pro-Kiev militias.

Burlakova, who serves as a commander of a five-person artillery mortar unit, did not begin her military career in the Ukrainian army.

For much of the war, which began in spring 2014, official government forces did not permit women to fight on the front lines; the 17,000 women who served in the military were allowed to work in only supporting roles, such as medics, engineers and administrators.

The hundreds of women who were desperate to fight instead joined nationalist paramilitary groups, which did offer women combat roles.

For the past year, Burlakova has fought alongside volunteers from the Right Sector, one of the most far-right pro-Ukrainian volunteer groups that clashed violently with Ukrainian law enforcement last summer.

The militia has denounced LGBT groups and has co-opted symbols from the World War II–era Ukrainian opposition to the Soviet Union, factions of which joined forces with Nazi Germany before resorting to fighting both the Soviets and the Nazis.

Burlakova says that while the Right Sector may attract people from the far right, she does not support such ideas; her priority was simply to find a group that would let her fight.

“For many people,” she says, “joining the Right Sector or volunteer groups was the easiest way to go to war.”

“The first thing I noticed was how many girls and young women were there,” she says.

“They all do the same things as the men, and they all seemed incredibly brave.”

Blesener, however, was disturbed by the Right Sector’s darker side, noticing that some members had swastika tattoos.

“It is shocking that a unit can at the same time embody virtues that I respect—such as allowing women to fight on the front line of combat—yet, on the other hand, be known for nationalistic rhetoric, Russophobia and hate speech,” she says.

“It's a tragedy to see that nationalism is now on the rise again in a country that suffered so much from it in World War II .”

At the height of the current war, the Right Sector was one of more than 40 pro-Ukrainian battalions fighting in the conflict—although few of the others were as extreme.

Despite their success on the battlefield, some militias had a tendency to violently enforce the law or oppose the government.

These groups were not the norm, but Kiev worried they might ultimately undermine its authority.

After an armed standoff between a Right Sector group and Ukrainian police officers in July 2015, President Petro Poroshenko ordered the militias to officially join the army or disband.

Many of the Right Sector’s troops joined the army’s 54th Brigade.

Most other groups joined different units of the military.

The integration of the militias meant that female fighters suddenly found themselves in an official army that did not permit them to fight.

To get around this restriction, many registered on paper as paramedics or support personnel to avoid being sent home.

But they would still fight as they had before.

“I was technically and officially a medic [when deployed at] Butovka mine,” Burlakova says, referring to her previous station in the Donetsk region.

“But really I had nothing to do with medicine. I was a regular soldier on the front lines with the same duties as everyone else.”

In June, the Ukrainian military amended its rules, and women like Burlakova were finally allowed to fight on the battlefield, serving as snipers, intelligence officers or operators of heavy military hardware.

Burlakova is now registered as a soldier and paid more than support staff.

She will also receive full army benefits if she is wounded or killed in the line of duty.

“Nobody cared about these things in the beginning of the war,” she says.

“But as time goes on, they become really important. If we needed money in the beginning, our friends could cover us. But they can't cover us for years.”

Blesener found that many women who joined the Right Sector came with a partner, while others met boyfriends or husbands in the battalion; many of these couples will not survive the war.

Burlakova’s fiancé was killed in January when he stepped on a land mine near one of the most dangerous checkpoints in the east.

Burlakova is devastated by his death but says it will keep her fighting until the war is over.

“I won't leave Donbass on my own will because every meter of the ground here is filled with the blood of our guys,” she says, adding that lots of her fellow soldiers are from nearby towns overrun by rebels.

“I am not going home until they get a chance to come home as well."