November 20, 2016
KIEV, Ukraine -- Ukraine's first president, who helped usher in the peaceful dissolution of the Soviet Union 25 years ago, said Ukraine's leaders today must find a similarly peaceful resolution of the separatist conflict in the east. 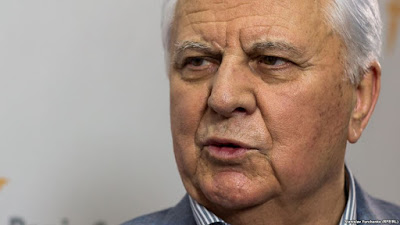 Former Ukrainian President Leonid Kravchuk says his nation must find a peaceful solution to the conflict in the east.

"We heeded our peoples then and signed the [dissolution] accords, and so why can't the country leaders today tap a solution consonant with the aspirations of their nations, which don't want a war?" Leonid Kravchuk said at an Atlantic Council event in Washington on November 18.

While Kravchuk said the West must keep up economic pressure on Russia by maintaining sanctions until it agrees to stop its aggression in Ukraine, he added that "you will not achieve order in the world only through sanctions."

Ukraine's only option in the end is to negotiate peace, he said.

"We have only one prospect ahead of us, and it implies dialogue and agreements,” Kravchuk said.

“Other prospects are nonexistent...I'm confident Ukraine has no other pathway than that of peace."

Kravchuk has previously said that while he is ready to take up arms to defend his country, he believes Russia would quickly defeat Ukraine if an all-out war broke out between them.

Kravchuk has also said previously that Ukraine might have to accept Russia's 2014 annexation of the Ukrainian Black Sea region of Crimea in order to regain control over territory in the east that is held by Russia-backed separatists as part of a peace settlement.

"Donbass will return without fail, and we will not have to wait long," he told TASS in August.

"As for Crimea, we will have to wait for a long time...Crimea was drawn into Moscow's orbit, so it is already part of the Russian federal system."

In August, he called on Ukrainian President Petro Poroshenko to ditch the Minsk peace process sponsored by Germany and France, which has been stalled, and instead try to negotiate a settlement directly with Russian President Vladimir Putin.

Russia maintains that it is not a party to the conflict in eastern Ukraine, although Moscow provides military, political, and economic support to the separatist movements.

The International Criminal Court (ICC) earlier this month determined the conflict in Ukraine to be "an international armed conflict between Ukraine and the Russian Federation."

Also speaking at the Atlantic Council event, Gennady Burbulis, a close aide of the late Russian President Boris Yeltsin, who signed the 1991 agreement that dissolved the Soviet Union, said the West's harsh line against Russia has been ineffective at bringing about peace in Ukraine.

Burbulis, who said the Soviet Union was doomed to fail, called for a softer, more nuanced dialogue with today's Kremlin.

"There is no other way than consensus, but consensus implies a different understanding of politics, a different culture of relations, not guided by the principle, 'I am stronger and you are poorer,'" he said.

Stanislav Shushkevich, who in 1991 was head of the Belarusian parliament and who also signed the agreement dissolving the Soviet Union with Yeltsin and Kravchuk, said that despite the success of the peaceful transition to a post-Soviet world back then, stubborn ethnic and territorial disputes have emerged and not all the old Soviet ways have disappeared. "

A whole range of symbols of the old Soviet Union have been resurrected because the mentality of Soviet people has been preserved," he said.

Unknown said…
Kravchuk will be well regarded by historians and by his fellow Ukrainians as the person who was most responsible for the dissolution of the USSR and Ukraine's independence. But that was more than a quarter century ago, and now, at 82, his views should be treated with respect but not as the final word on anything. Old people see the world from the perspective and milieu in which they were raised and much of their life was lived. Kissinger is an obvious example of this. He still thinks in terms of grand alliances between superpowers and carving up the world into spheres of influence without paying heed that the parts of the world that he would hope to carve up are now in a position to strongly resist the plans of such self-proclaimed "masters of of the universe".

Kravchuk comes from an era when Russian power was unchallenged and when Ukrainians scratched whenever Russians itched. I still remember how blindly and unquestionably Ukrainians, even after the first 10-15 years of independence copied almost everything that Moscow did. But now, Ukrainians don't even concern themselves with what Moscow is doing except when it infringes on their sovereignty. Ukraine now has the second largest land force in Europe and - within a year or two - will have air power and advanced weaponry sufficient to deter any Russian assault.

Yes, sanctions are not enough - at least not the timid and largely unenforced ones that have been imposed by the EU and US. But they will do for now. Donbas will be resolved not by sanctions and not by "negotiation" alone but by a clear understanding by both sides (especially Russia) that continued war is costly and will not achieve the desired end. And any "negotiation" - whether bilaterally or multilaterally with Russia - will be successful only when Ukraine has the military
capability to enforce its will independently. And that will take a little more time.

In the meantime, Ukrainians can take comfort in knowing that war has made it possible for them to build up in two years a military force that most European states can only envy, will no longer be the objects of super-power "deals", and that Russia is daily losing money and military personnel and equipment in a war that is not at all likely to give them the outcome they are seeking.
8:58 AM

It used to be just the Ukrainian President, and now Ukrainian Government with it's chief Mr. Groysman who systematically getting reed off young reformers.
Ukrzalysnytsy just resonantly had seven billion UAH money have not being used for the critically needed equipment maintenance and new inventory purchases, instead company is being transferred to direct control of Groysman's Government and we all waiting to see how these funds will be socked out from the Company.