September 02, 2016
WASHINGTON, DC -- Companies building a multi-billion dollar bridge to link the Russian mainland with annexed Crimea, a project close to the heart President Vladimir Putin, were targeted by the United States in an updated sanctions blacklist on Thursday. 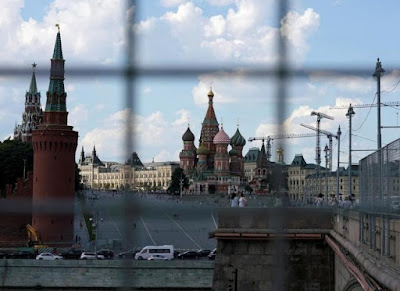 A view through a construction fence shows the Kremlin towers and St. Basil's Cathedral on a hot summer day in central Moscow, Russia, July 1, 2016.

The U.S. Department of the Treasury added dozens of people and companies to the list, first introduced after Russia annexed the Crimean peninsula from Ukraine in 2014 and expanded over its support for separatist rebels in the east of the country.

As well as multiple subsidiaries of Russian gas giant Gazprom (GAZP.MM) and 11 Crimean officials, the Treasury named seven companies directly involved in the construction of the 19 km (11.8 miles) road-and-rail connection across the Kerch Strait, dubbed "Putin's bridge" by some Russians.

Chief among those were SGM-Most, a subsidiary of lead contractor Stroygazmontazh which is already under U.S. sanctions, and sub-contractor Mostotrest (MSTT.MM), one of Russia's biggest bridge builders.

"Treasury stands with our partners in condemning Russia's violation of international law, and we will continue to sanction those who threaten Ukraine's peace, security and sovereignty," said John Smith, acting director of the Treasury's Office of Foreign Assets Control, which levies sanctions.

The Russian Foreign Ministry was not immediately available for comment, but Moscow has previously said sanctions levied over its actions in Ukraine undermine efforts to resolve the conflict.

Set to be the longest dual-purpose span in Europe when completed, the Kremlin sees its 212-billion rouble ($3.2 billion) bridge as vital to integrating Crimea into Russia, both symbolically and as an economic lifeline for the region.

Putin has called the undertaking an historic mission.

But the project has had to contend with Western sanctions since the construction contract was handed to Stroygazmontazh last year, a firm controlled by Arkady Rotenberg, a close ally of Putin's and his former judo partner.

Rotenberg is already under U.S. sanctions because of his links to the Russian leader, which the Treasury says have helped him win billions of dollars in state contracts.

He cannot raise capital in the West or hire Western sub-contractors to help his firm complete the project.

Officials linked to the bridge's construction say they have all the skills, equipment and supplies required to build it without Western help.

"The sanctions will not affect the construction of the bridge," Crimea Bridge infocentre, the organization responsible for communications about the project, said in a statement on Thursday.

"The contractor has all the resources necessary for the timely completion of the project."

Rotenberg and his brother Boris have denied getting help from the Russian leader for their businesses.

Gazprom did not reply to a request for comment.

The restrictions on the energy giant and its subsidiaries prevent U.S. firms or citizens from providing goods or services supporting the firm's deepwater, arctic offshore, or shale oil projects.

The restriction does not apply to financial services, such as clearing transactions or providing insurance for such projects.