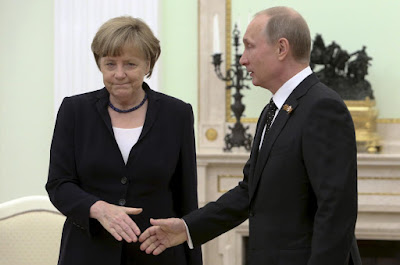 Vladimir Putin offers to shake hands with Angela Merkel in the Kremlin on May 10, 2015. Stephen Blank writes that Putin will play every card in his book to undermine Merkel and French President François Hollande. It also would not be surprising, he writes, if Putin continues to bomb Syria to provoke still more refugee flights to Europe, using migration as a tool in his campaign. While Putin’s immediate target is Ukraine, ultimately he wants to reorganize Europe much as Hitler did at Munich.

While Russian President Vladimir Putin showed that Russia is not as isolated as many in the West think it should be, Putin failed to convince France and Germany to pressure Ukraine to implement the Minsk II cease-fire accord.

Russia cannot be isolated if there is to be a nonviolent resolution of the war in Ukraine.

It is clear that neither Europe nor the United States knows how to achieve its strategic goal of removing Bashar al-Assad from power in Syria without dealing directly with Putin, who is generally acknowledged to be driving the Syrian agenda.

It is also clear, however, that sanctions will remain as long as Moscow does not implement its obligations under Minsk II, and that neither France nor Germany will help Putin decide Ukraine’s destiny without Ukraine’s presence at those discussions.

Thus, there was no repeat performance of the Munich conference at Hangzhou, nor will there be anytime soon.

Politicians and analysts often overuse or misapply the Munich analogy in world politics.

But the core analogy of four great powers determining the destiny and territory of an absent fifth state retains its salience here:

While Putin’s immediate target is Ukraine, ultimately he wants to reorganize Europe much as Hitler did at Munich.

Indeed, from Putin’s standpoint, the greatest gift he could get would be to make Germany and France complicit with Russia in the crime of destroying Ukraine’s de facto independence and territorial integrity.

Apparently, the massive deployments around Ukraine will outlast the impending Kavkaz-2016 exercises and remain there as a constant source of pressure toward that end.

But while the West will not respond militarily to Russian actions in Ukraine, it evidently also will not throw Ukraine under the bus, as Putin wants.

In the coming months, we can expect not just a ratcheting up of combined military and nonmilitary pressure in Ukraine, including a continuing refusal to implement the Minsk I and II accords, but also an increased information war, economic blandishments (such as energy deals like Nord Stream and Arctic exploration, trade opportunities and investment opportunities) and efforts to subvert the French and German governments.

Both France and Germany will hold elections next year, and the challengers to the incumbents, Nicolas Sarkozy and the German Socialist Party, have telegraphed their intentions to make deals with Putin at Ukraine’s expense.

Given those facts, it stands to reason that Putin will play every card in his book to undermine French President François Hollande and German Chancellor Angela Merkel.

It also would not be surprising if Putin continues to bomb Syria to provoke still more refugee flights to Europe, using migration as a tool in his campaign.

Since the West can no longer isolate Russia, Western leaders would undoubtedly prefer to find a modus vivendi with Russia based upon the Minsk process.

But as President Barack Obama said in Hangzhou, Russia cannot be trusted.

U.S. officials fear that any accord with Moscow on Syria will be broken as soon as Moscow finds it desirable to do so.

After all, Russia has broken every treaty about the Commonwealth of Independent States it has signed: the Budapest accord, the Treaty on Conventional Armed Forces in Europe, the Vienna Note and the Intermediate-Range Nuclear Forces Treaty.

Since it is an article of faith in Russia that Ukraine cannot be an independent entity distinct from Russia, the Russian establishment and many liberals believe that giving back Crimea or acknowledging responsibility for the war in Ukraine entails the fall of the government.

And they may not be wrong.

But they can retain Ukrainian territory only by force or by persuading Europe to accept Russian terms and sell out Ukraine.

Since protracted war with Ukraine or NATO is an unappealing objective, we can expect a drawn-out European campaign.

Russia will use all other instruments of power, along with the constant threat of renewed fighting, to subvert the political order in Ukraine, Germany and France, if not elsewhere in Europe.

While Western leaders still seek dialogue with Russia, it is important to remember that Putin has long since declared war, or at least a state of siege, with Europe and cannot accept anything less than full legitimization of his conquests.

At Hangzhou, he had the satisfaction of no longer being isolated.

But that remains an incomplete victory as long as he cannot induce his interlocutors to lift sanctions and turn a blind eye to Russian involvement in eastern Ukraine.

While in the future there may not be war with Europe or with Ukraine, despite ongoing cease-fire violations, there will be no peace either.

Mr. Lutsenko wants to undermine current reforms and fight against corruption in Ukraine, its a shame.
7:34 AM