August 22, 2016
WASHINGTON, DC -- Is Russia preparing to invade Ukraine? A build-up of Russian army forces along its long border with Ukraine has people in Washington, DC, a little worried about Russia’s intent and the very real potential for a full-scale war in eastern Europe. 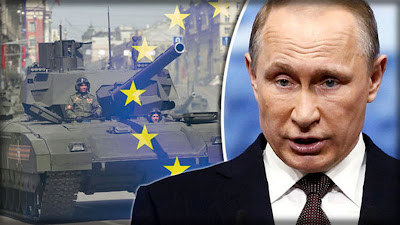 Officials and experts alike see the bolstering of troops and war materiel as a sign of imminent conflict, and one arms expert says the coming month would be a “perfect” time for Russia to invade Ukraine.

The Washington Free Beacon reported August 17 that Pentagon officials have pinpointed eight separate locations along the Ukraine border with Russia where Russian Federations troops and war materiel have increased, resulting in a total deployment of 40,000 troops in the border region.

With more military exercises scheduled, the influx of men and armaments over the past year has led to worries that Russia might use the exercises as a cover for an attack on Ukraine.

And an attack on Ukraine could lead to an escalation in hostilities between Russia and countries aligned with NATO (North Atlantic Treaty Organization), a potentiality many fear could roll into a conflagration that could possibly lead to World War 3.

A defense official told the Free Beacon, “Russian units will likely practice reinforcing the [Crimean] peninsula through such activities as amphibious landings and air defense exercises, and this may involve the change out of equipment and long convoys of military vehicles.”

The official’s warning echoes a report from the Atlantic Council issued just last month, wherein it was posited that with the Russian army’s constant running of military exercises and drills, in addition to its bolstering of its western border defenses in the past couple years, it was possible that the exercises might be used as a distraction to actually strike at weak targets like the Baltic States.

According to the Inquisitr, the report noted that with almost little or no warning, Russian troops could sweep through the small countries in a matter of hours, effectively moving the nation’s western border a few hundred miles westward to Poland.

The Pentagon’s wariness is understandable, according to a former arms control official, who now heads the Potomac Foundation, a foreign and domestic policy analysis organization.

Citing both the recent military maneuverings in Crimea, a part of Ukraine that Russia annexed in 2014, and on the Ukraine border itself, Dr. Phillip Karber is of the opinion that the timing is perfect for a Russian invasion.

“For the next month the terrain is perfect for armor moving cross-country and the skies are clear for air.”

Karber went on to reinforce the reasoning:

“The 24th of August is Ukraine’s Independence Day, which is when the Russians attacked in 2014. A successful campaign, with U.S. and NATO doing nothing but verbiage, re-establishes Russia as a major European power that has to be dealt with and increases Putin’s popularity at home.”

Recent developments have added to the tension as well.

Vladimir Putin’s chief of staff, Sergei Ivanov, a former KGB official that many think might have been a steadying hand on the Russian president, was fired last week.

In the same time period, as was reported by the Inquisitr, several videos were posted to the internet showing purported Russian troop movements and tank shipments into Crimea.

The killing of a Russian soldier on the border and the closing of two of the three border crossings between Crimea and Ukraine have also added to the mounting tension.

In fact, Dr. Karber said that an incident such as what he called the “trumped-up” charges from Moscow of a recent so-called Ukraine terrorist attack inside Crimea last week could be used as a pretext for an invasion.

Escalations in hardline rhetoric and increasing the number of military exercises in the past few years have led many to announce that the Russian Federation and NATO have re-entered a “Cold War” relationship, much like the adversarial political dance around the constant threat of a superpowers confrontation that existed from the end of World War II well into the 1990s.

Many also worry that the saber-rattling might well be a precursor to World War 3.

Barber blames the foreign policy of the administration of President Barack Obama for much of Russia’s increasing aggressiveness.

“The fact that a full scale Russian invasion is still a plausible scenario after 30 months of conflict is an abject repudiation of an American policy of ‘leading from behind’ and West European fetish for trying to find ‘off-ramps’ that Putin hasn’t the slightest interest in taking.”