Ukraine At A Crossroads: Could Putin Lose His Job Over Mishandling The Crisis?

August 21, 2016
KIEV, Ukraine -- One of the unintended consequences of Great Britain’s Brexit vote is that the European Community has put any future expansion of its membership on hold. 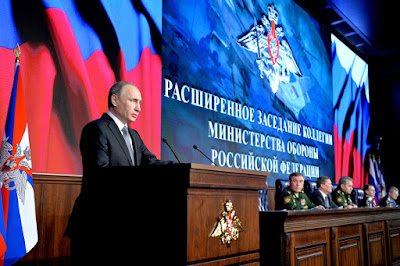 Kiev had signed the Ukraine-European Union Association Agreement on June 27, 2014, with high hopes that it would eventually lead to a full application to join the European community by 2020.

Petro Poroshenko, Ukraine’s then newly elected president, had described the 2014 agreement as a “first but most decisive step” toward joining the EU.

The initial agreement had been followed by Ukraine joining the Deep and Comprehensive Free Trade Area on January 1, 2016.

It also guarantees European investors in those sectors the same regulatory environment that currently exists within the EU.

Similar agreements have been signed with Moldova and Georgia.

The agreement is designed to bring the Ukrainian economy, its political governance and the legal system up to EU standards, and to pave the way for formal entry into the EU.

Now, in the wake of Brexit, any hope of becoming a full-fledged member of the EU has receded into the indefinite future.

In the meantime, of late, Moscow has been reminding Kiev of its strategic vulnerability by ratcheting up tension with Ukraine.

Russian President Vladimir Putin, on August 11, accused Ukraine of staging two “incursions” into Crimea to infiltrate “trained saboteurs” in order to target “critical infrastructure” over the weekend of August 5.

Russia has claimed that one of its soldiers and an employee of the FSB security agency were killed.

Putin used the alleged incident to cancel Russian participation in scheduled talks in Normandy, France to discuss the implementation of the Minsk Peace Accord between Russia and Ukraine.

The Ukrainian government labeled the Russian claim “a fantasy,” and accused Putin of deliberately escalating tensions in the two-year-old conflict between the two countries.

In the meantime, the Kremlin announced that the Russian Navy would be staging “war games” in the Black Sea.

Several days later the Kremlin also announced that it would deploy the advanced S-400 Triumph air-defense missile system in the Crimea, as well as stage additional military exercises along its eastern border with Ukraine.

In addition, an unspecified number of troops in adjoining rear areas are slated to also participate in the exercises.

The announced exercises could be nothing more than saber rattling on Moscow’s part or a prelude to a future invasion of Ukraine.

Russia conducted similar military exercises prior to its seizure of Crimea on February 27, 2014.

The upshot is that Kiev finds itself increasingly in an economic and diplomatic no-man’s-land, dangerously perched between Russia and the EU, dependent on both but not formally within either bloc.

Currently, about a sixth of Ukraine’s external trade is with Russia, a third is with the EU, and the balance with a variety of other countries.

For the Kremlin, Ukraine is simply too important strategically to ever allow it to become a full-fledged member of either the EU or NATO.

Ideally, Russia would want a pro-Russian government in power, but it could live with a neutral government.

A pro-Western government integrated into the EU and NATO, as has happened with the other former Warsaw pact states in Eastern Europe, would be simply unacceptable.

The Kremlin has made it clear that a NATO membership for Ukraine would immediately precipitate a Russian invasion.

That threat would persuade most NATO members to defer a Ukrainian request for membership rather than risk finding the organization being called on to defend its newest member from a Russian invasion.

Is Russia considering a second invasion of Ukraine?

Perhaps eventually, but probably not for the moment.

To begin with, the Russian military simply lacks the manpower to invade and occupy Ukraine.

Such an invasion would also kill any prospects of lifting the economic sanctions against Russia imposed by the EU and the United States.

It would also breathe new life and resolve into NATO at a time when the organization is uncertain about its ongoing role and mission.

A more limited invasion, say the seizure of Odessa, and/or the portions of the Black Sea coast between Odessa and Crimea, or the coastline along the Sea of Azov, would be more attainable militarily but would still precipitate the same consequences as a full-fledged invasion.

Instead what is more likely is that the saber rattling is part of a broader Russian strategy of keeping Ukraine unbalanced by alternating between the possibility of peace and the prospect of renewed fighting, while at the same time giving the EU and NATO a not so subtle warning that cozying up to Kiev will draw them into the middle of a hot war zone.

Moreover, the lack of a strong response by either NATO or the U.S. to the Russian escalation of tensions allows the Kremlin to send an equally unsubtle message to the former Soviet states and clients in the “Near Abroad” that they cannot rely on Europe, the United States or NATO should their security be threatened.

Vladimir Putin’s hold on the Kremlin may also be an issue here.

In recent weeks Putin has made significant changes to his inner circle, in what some intelligence analysts have described as a purge.

He abruptly replaced his longtime Chief of Staff and close confident, Sergei Ivanov, with Anton Vaino.

Additionally, a raft of high-level officials has been removed, some on the pretext of criminal activity, over the last few weeks.

Saber rattling in Ukraine allows Putin to project an image of power and authority, even if in the end it proves to all be a bluff.

Among the Russian elite, privately, Putin is blamed for seriously mishandling the situation in Ukraine.

Between 2012 and 2016, Kiev went from a pro-Russian government to a pro-Western government.

Russia was left with control of just Crimea and the eastern portion of the Donbass basin.

There is little doubt that the U.S. and its allies were responsible for encouraging and partially funding the Euromaidan protests that precipitated the 2014 revolution.

Those protests would never have started, however, had the Kremlin and the pro-Russian government of Viktor Yanukovych not overreached in trying to bring Ukraine into closer ties with the Russian Federation.

Beyond keeping tension in the region high, Russia has not managed to accomplish much in Ukraine since its 2014 invasion.

The Ukrainian Army has effectively contained the separatists from further expansion, even though it has not been able to roll them back in a significant way.

Only with significant ground support from the Russian military can the separatists hope to expand their enclaves.

In the meantime, the imposition of economic sanctions against Russia came at a time when the Russian economy was already reeling from the collapse of crude oil prices.

The sanctions have lasted longer than the Kremlin imagined they would and, coupled with ongoing low petroleum prices, their impact on the Russian economy has been profound.

Over the last two years the dollar-ruble exchange rate has gone from 36 rubles to 63 rubles to the dollar.

Foreign investment has virtually dried up and the economy and the standard of living has been contracting.

Ultimately, the Russian strategy toward Ukraine will be shaped by two, at times conflicting, objectives: the need to eliminate the economic sanctions against Russia and the need to ensure that the government in Kiev is ideally a pro-Russian or, at worst, a strictly neutral government.

A military intervention at this time may solve the governmental issue at the expense of aggravating the economic one.

For that reason, a military solution is the least desirable option and would only be used if Moscow saw Kiev slipping irreversibly from its grasp, i.e., joining NATO or a full membership in the EU.

Alternatively, if a political or diplomatic solution can’t be found, Russia’s elite might opt to offer its own version of a “reset button,” ousting Putin and blaming him for the Ukrainian debacle and offering to “normalize” relations with Ukraine, Europe and the United States.

It’s unlikely that the Kremlin would ever give up its control of Crimea.

Some compromise over the status of the Russian separatists in the Donbass basin and a full implementation of the Minsk Peace Accords in return for keeping Ukraine out of NATO and stopping short of a full membership in the EU common market, might, however, lead to the elimination of the sanctions.

A more aggressive deployment of U.S. air forces in Eastern Europe and the prospect that they might be deployed to counter a Russian invasion of Ukraine would go a long way to taking the Russian military option off the table.

Such a move might prompt the Kremlin to find a political and diplomatic solution.

It would also be seen as a significant escalation by the United States, however, and could well precipitate a preemptive Russian military response before the U.S. deployment was operational.

In the end, it will be all about who blinks first.

So far Vladimir Putin has refused to blink.

Europe and the United States have followed suit, despite the wavering of a few countries.

Whether Russia’s elite, whose pocketbook is certainly being decimated by the impasse, will prove to be as steadfast as Putin remains to be seen.