August 22, 2016
KIEV, Ukraine -- By any standards, the drumbeat of growing tensions between Russia and Ukraine this month has been especially ominous. 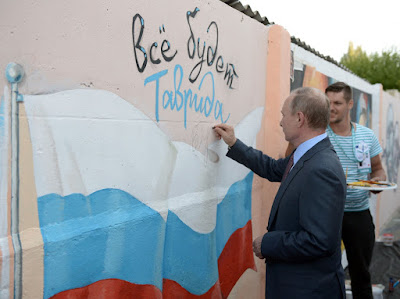 It began as Russian President Vladimir Putin accused Kiev of embracing the “tactics of terror,” after Russia claimed to have caught Ukrainian saboteurs in Crimea.

Ukrainian President Petro Poroshenko put troops on alert and warned that the country might have to move toward martial law and mobilization if the conflict in the east or Crimea escalated.

Russia is now set to hold large military drills in the region next month.

And in eastern Ukraine, the use of heavy weapons between Russian-backed separatists and the army has increased as opposing trenches have crept so close that opposing fighters can shout across the breach.

Analysts say tensions are at their highest since the signing of what are known as the Minsk agreements in February 2015.

And in Kiev, it is not unusual to hear once again that Russia is preparing to invade Ukraine.

“We view it as a real threat,” said Mikhail Samus, deputy director for international affairs at the Kiev-based Center for Army, Conversion and Disarmament Studies.

He added that a Russian Security Council meeting led by Putin in Crimea this weekend increased concerns of an escalation.

“Putin is controlling the situation, and that makes it the most dangerous situation,” Samus said.

The incident earlier this month, the facts of which are hotly disputed, appeared to be a possible flash point.

Ukraine said the incident was invented.

The truth likely lies somewhere in between.

“Whether Crimea happened or did not happen does not matter anymore,” said Michael Kofman, a fellow at the Kennan Institute of the Wilson Center who focuses on post-Soviet security issues.

“Russia can make it real by simply reacting to it as though it was real.”

Alex Ryabchyn, a member of Ukraine’s parliament, said Putin is looking to send a “signal to the West” to return to the negotiating table over Ukraine, believing that Kiev’s Western partners are losing patience with the country amid the U.S. elections, the migration crisis and other urgent issues.

“What will you do if I attack or take some anti-terrorist measures?” Ryabchyn said.

“Will you invade? Will you express concern? Let’s start negotiating, because I can choose to do this or not to do this at any time.”

Russia quickly used the attacks to refocus attention on the Minsk accords.

Putin, in remarks from Crimea on Friday, said the reason for the attack in Crimea was clear:

“Because Ukraine is either unwilling or unable for some reason to implement the Minsk agreements.”

The accords include the approval of a “special status” for the Donbass region in eastern Ukraine and the holding of local elections whose terms remain disputed and largely favorable to Moscow.

Kiev, in turn, has demanded that rebels return control of the country’s eastern borders with Russia, a conduit for fighters, weapons and other contraband.

“Ukraine doesn’t have much interest in implementing Minsk,” Kofman said, noting a growing desire in Kiev to freeze the conflict in Donbass.

“And my sense of this Crimea incident is that the Russians are trying to find some kind of leverage with the Europeans,” who are part of the negotiations.

With new deadlines approaching for the European Union to renew sanctions against Russia and little progress so far on implementing the accords, Russia may have decided to “scare the hell” out of the West, he said.

Violence in eastern Ukraine has also risen during the summer months.

An International Crisis Group report released last week said the 310-mile line of separation between the Ukrainian and separatist sides is “not fit for purpose,” and that the Minsk agreements are “being violated daily and heavily.”

“All officers interviewed described the Minsk process as dead and strongly supported the idea, floated by some leading politicians, to seal off the separatist enclaves for the foreseeable future,” the report said.

Alexander Hug, a leader of the Organization for Security and Cooperation in Europe’s Special Monitoring Mission to Ukraine, said in an interview that OSCE monitors are increasingly denied access to the conflict zone.

The tempo of fighting is worse where front lines come within meters of one another, he said, adding that some heavy weaponry, which was supposed to be removed from the front and inventoried, has also returned.

As violence in the east heats up, Ukrainian officials have suggested that Russia may use upcoming military drills, called Kavkaz (Caucasus) 2016, as cover for military action against Ukraine.

The drills are the first to integrate the Crimean Peninsula, which was annexed by Russia in 2014, into the country’s military planning, and thousands of Russian troops will be brought in for air, land and sea exercises.

Ukrainian government analysts have recalled that exercises served as staging grounds for troop incursions in 2014, as did Russian military exercises held shortly before the Georgian war of 2008.

Ukraine’s ambassador to the United Nations suggested that Russia may have “bad intentions,” while the West has also said it would have liked observers to be present.

At the same time, Pentagon spokesman Gordon Trowbridge said that American officials “don’t necessarily see any evidence of troop movements that are so large that we’re concerned about those on their own.”

However, he said, U.S. officials are “extremely concerned” about escalating rhetoric between Russia and Ukraine.