August 31, 2016
KIEV, Ukraine -- As the late summer weather begins to cool, Russian military exercises have kept the tensions hot in Ukraine and across Eastern Europe. 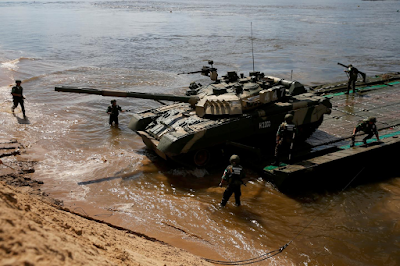 A T-80 tank, operated by a Russian crew, is driven off a pontoon bridge during the Open Water competition for pontoon bridge units, part of the International Army Games 2016, in the city of Murom, Russia, on August 6. Nolan Peterson writes that Russian military exercises are like the smoke screens before the Russian stealth invasions of Georgia and Crimea.

Periodic flare-ups in the ongoing war in Ukraine’s embattled Donbas region this summer have renewed fears of a full-on Russian invasion and spurred an unprecedented post–Cold War redeployment of NATO military forces toward the alliance’s eastern flank to deter further Russian aggression in the region.

“If there is an interest in Moscow in stability and predictability, then these exercises are not the way to go,” NATO Deputy Secretary-General Alexander Vershbow said Monday.

Russia has staged about a dozen snap military exercises in the past two years, while NATO member countries have not held any since the end of the Cold War, according to news reports.

In September, Russia has plans for a large-scale strategic military exercise called Kavkaz-2016.

The exercise, which is an annual event, will include units deployed near the borders of Ukraine, Georgia and Azerbaijan—including two Russian military districts in the Southern and Northern Caucasus, the Russian Black Sea Fleet (headquartered in occupied Crimea) and the Caspian Flotilla.

It is not immediately clear the exact size of this year’s exercise, but last year it comprised 95,000 troops, 7,000 vehicles and 150 aircraft, according to a report by IHS Markit, a U.K.-based intelligence and analysis firm.

“It is important to assess our capabilities for protecting national interests in the southwestern strategic direction amid the uneasy international military and political situation,” Russian Defense Minister Sergei Shoigu said in January while commenting on plans for Kavkaz-2016, according to the Russian news agency RIA Novosti.

Some military experts say the combination of snap military drills with the planned Kavkaz-2016 exercise have the hallmarks of Russian military maneuvers that served as smoke screens for the invasion of Georgia in 2008 and the hybrid warfare invasion of Ukraine’s Crimean Peninsula in 2014.

Yet others argue Russia’s strategic military objectives have more to do with diplomatic leverage than military outcomes.

Alex Kokcharov, IHS Markit’s principal analyst for Europe and the Commonwealth of Independent States, said the Kremlin is probably maneuvering to destabilize the post-revolution government in Kiev, and consequently gain leverage for negotiating sanctions relief at the G-20 summit to be held in Hangzhou, China, from September 4 to 5.

“War is a continuation of policy,” Kokcharov told The Daily Signal.

“And the Kremlin’s policy is to keep Ukraine sufficiently destabilized to stall the implementation of its reform agenda and economic recovery, and thus to engineer a fall of the current pro-Western government in Kiev.”

A combined force of pro-Russian separatists and Russian regulars has been fighting a limited war against Ukraine’s military in the southeastern Donbass region of the country since spring 2014.

One year ago, the war’s intensity dropped precipitously as both sides to the conflict renewed their commitment to the terms of the ineffectual second cease-fire, called Minsk II.

In theory, the war in Ukraine was supposed to end in September 2015.

On Tuesday, the Ukrainian military announced that during the previous 24 hours combined Russian-separatist forces had attacked Ukrainian positions with more than 690 mortars and 250 artillery shells, including a Grad rocket attack near the southern port city of Mariupol.

Attacks on Ukrainian forces have spiked several times this summer, most notably around the time of the NATO summit in Warsaw (during which NATO members proclaimed their support for Ukraine), and after the August 10 skirmish on the border of Russian-occupied Crimea and Ukraine.

The Crimean border incident was serious enough to prompt Ukrainian President Petro Poroshenko to place Ukraine’s military on its “highest level of alert,” and for Western media outlets to momentarily divert their attention back to the only ongoing land war in Europe.

In an August 24 interview with CNN’s Christiane Amanpour, Poroshenko compared Russia’s support for separatists in eastern Ukraine with the Russian bombing campaign on Aleppo, Syria.

Poroshenko claimed Russia’s overall objective was to “destabilize the global security situation” and for Ukraine to be “part of the Russian empire.”

The war’s escalations this summer have not resulted so far in any significant change in territory or military offensives.

The war in Ukraine remains locked in a static artillery back-and-forth fought from within trenches and the artillery-blasted ruins of towns scattered along the front lines.

And domestic troubles inside Ukraine, such as the July 20 car bomb assassination of a journalist in downtown Kiev, also highlight the steep road ahead for Ukraine’s ongoing transition to a democratic society free of the vestiges of communism and the follow-on decades of corrupt oligarchic thug rule.

The next potential inflection point for the Ukraine war is September’s G-20 summit in China.

Russian President Vladimir Putin will likely use the sidelines of the summit to discuss the Ukraine crisis with other world leaders and press for the lifting of sanctions put on Russia for its 2014 Crimean land grab.

“Russia certainly has the military capability to invade Ukraine, but the benefits of grabbing new land in Ukraine would be much smaller than the costs, both direct and indirect, such as potential new economic sanctions,” Kokcharov said.

He added: I still continue to hold the view that Putin aims to use intimidation to raise the stakes in the diplomatic game in order to push for negotiations on Donbass settlement that excludes the Ukrainian government from the negotiating table, by branding them illegitimate and terrorists.