More Of Kremlin’s Opponents Are Ending Up Dead

August 23, 2016
MOSCOW, Russia -- From a certain perspective, certainly the Kremlin’s, Vladimir Kara-Murza’s behavior in Washington could be seen as treasonous, a brazen betrayal of his homeland. 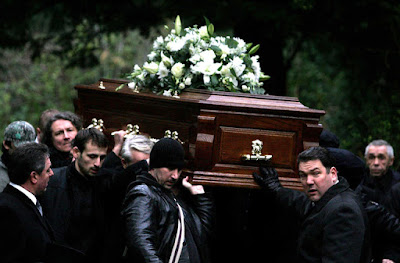 The funeral of Alexander V. Litvinenko, a Putin opponent who died of radioactive polonium-210 poisoning in London in 2006.

In a series of public meetings on Capitol Hill, Mr. Kara-Murza, a leader in the Russian opposition, urged American lawmakers to expand economic sanctions against the Russian government under a law known as the Magnitsky Act.

That would hasten political change in Russia, he argued.

Back in Moscow a month later, in May 2015, the changes Mr. Kara-Murza detected were going on in his own body.

Midway through a meeting with fellow dissidents, beads of sweat inexplicably dotted his forehead.

“It all went so fast,” he recalled.

“In the space of about 20 minutes, I went from feeling completely normal to having a rapid heart rate, really high blood pressure, to sweating and vomiting all over the place, and then I lost consciousness.”

He had ingested a poison, doctors told him after he emerged from a weeklong coma, though they could find no identifiable trace of it.

While Mr. Kara-Murza survived, few others in his position have proved as lucky.

He said he was certain he had been the target of a security service poisoning.

Used extensively in the Soviet era, political murders are again playing a prominent role in the Kremlin’s foreign policy, the most brutal instrument in an expanding repertoire of intimidation tactics intended to silence or otherwise intimidate critics at home and abroad.

Russia’s president, Vladimir V. Putin, has made no secret of his ambition to restore his country to what he sees as its rightful place among the world’s leading nations.

He has invested considerable money and energy into building an image of a strong and morally superior Russia, in sharp contrast with what he portrays as weak, decadent and disorderly Western democracies.

Muckraking journalists, rights advocates, opposition politicians, government whistle-blowers and other Russians who threaten that image are treated harshly — imprisoned on trumped-up charges, smeared in the news media and, with increasing frequency, killed.

Political murders, particularly those accomplished with poisons, are nothing new in Russia, going back five centuries.

Nor are they particularly subtle.

While typically not traceable to any individuals and plausibly denied by government officials, poisonings leave little doubt of the state’s involvement — which may be precisely the point.

“Outside of popular culture, there are no highly skilled hit men for hire,” Mark Galeotti, a professor at New York University and an authority on the Russian security services, said in an interview.

“If it’s a skilled job, that means it’s a state asset.”

Other countries, notably Israel and the United States, pursue targeted killings, but in a strict counterterrorism context.

No other major power employs murder as systematically and ruthlessly as Russia does against those seen as betraying its interests abroad.

Killings outside Russia were even given legal sanction by the nation’s Parliament in 2006.

Applied most notoriously in the case of Alexander V. Litvinenko, a Putin opponent who died of polonium-210 poisoning in London in 2006, murders and deaths under mysterious circumstances are now seen as such a menace that Kremlin critics now often flee the country and keep their whereabouts secret.

Russia has never acknowledged using the authority under the 2006 law and has specifically denied any government ties to high-profile cases, including the Litvinenko murder.

Among those fleeing Russia recently is Grigory Rodchenkov, a whistle-blower in Russia’s sports doping scandal.

This is not without reason.

In the case over state-sponsored doping, two other officials with knowledge of the scheme died unexpectedly as the outlines of the scandal began to emerge.

Just this month, another whistle-blower, Yulia Stepanova, a runner in hiding with her husband in the United States, was forced to move amid fears that hackers had found her location.

“If something happens to us,” she said, “then you should know that it is not an accident.”

“The government is using the special services to liquidate its enemies,” Gennadi V. Gudkov, a former member of Parliament and onetime lieutenant colonel in the K.G.B., said in an interview.

“It was not just Litvinenko, but many others we don’t know about, classified as accidents or maybe semi-accidents.”

Most recently, a coroner ruled that blunt-force trauma caused the death of a Kremlin insider, Mikhail Y. Lesin, 57, in a Washington hotel room last year, not the heart attack his colleagues first said.

In July, the Russian Interfax news agency reported that Aleksandr Poteyev, 64, an intelligence officer accused of defecting and betraying a ring of Russian spies living undercover in American suburbs, had died in the United States.

Still, the Magnitsky Act, the law that Mr. Kara-Murza was in Washington urging lawmakers to expand, has proved to be perhaps the most lethal topic of all over the years.

Sergei L. Magnitsky, a lawyer and auditor, was jailed on tax evasion charges while investigating a $230 million government tax “refund” that corrupt Russian officials had granted to themselves.

He died in 2009 after having been denied essential medical care in prison, earning the Kremlin widespread condemnation.

In response, William F. Browder, an American financier who was the target of the tax fraud during time he spent working in Russia and had employed Mr. Magnitsky, campaigned in Congress for a law punishing the officials involved in the misdeeds and subsequent mistreatment of the auditor.

The proposed measure, which eventually passed in 2012 as the Sergei Magnitsky Rule of Law and Accountability Act, denied visas and blocked access to the American financial system for Russians deemed to have committed rights abuses and avoided punishment at home — including those involved in the Magnitsky tax fraud case.

Putin, perceiving an intrusion into his country’s affairs, campaigned hard against the measure.

When it passed, he retaliated by ending American adoptions of Russian children.

The law became a prototype for the blacklisting of prominent Russians accused of murders, human rights abuses and financial theft, among other violations.

The question of who was involved in the tax fraud became vitally important first to the investigation, and eventually to the final scope of the legislation.

Access to inside information became pivotal and, it turned out, lethal.

To date, five people who either handed over such information or were potential witnesses have died under mysterious circumstances that, in their sophistication, suggest state-sponsored killings.

One of the victims was Mr. Magnitsky, whose death was hardly the stuff of cloak-and-dagger security operations.

Two others died before Mr. Magnitsky.

And as the case gained greater prominence, others began dying under mysterious circumstances.

One victim whose death preceded Mr. Magnitsky’s, Valery Kurochkin, a potential witness whose name appeared on documents related to the fraud, fled Russia for Ukraine but died there of liver failure at the age of 43.

The other, Oktai Gasanov, a low-level figure in the fraud case but one who might have shed light on the group’s modus operandi, died of heart failure at 53.

Then, after Mr. Magnitsky’s death in prison, a fourth insider met an untimely end in a plunge from a balcony.

A fifth, a banker linked to the scheme, Alexander Perepilichny, made it to London in 2009 and passed wire-transfer records to Swiss investigators.

In 2012, however, at the age of 44 and in apparently excellent health, he suffered a heart attack while jogging.

Police were left scratching their heads over the body found crumpled on a road in a well-guarded housing development, home to Kate Winslet and Elton John.

An autopsy initially did nothing to clear up the questions.

It was not until 2015 that a botanist was able to identify the presumptive cause of Mr. Perepilichny’s death:

His stomach held traces of gelsemium, a rare, poisonous plant grown in the Himalayas and known to have been used in Chinese assassinations.

A coroner’s inquest is scheduled for September.

“All of this sounds like paranoid conspiracy theories,” Mr. Browder said in a telephone interview.

“But there are too many of these happening to important people. Captains of industry and lawyers are not dying left, right and center like this in the West.”

Poison has been a favorite tool of Russian intelligence for more than a century.

A biochemist, Grigory Mairanovski, labored in secret from 1928 on the task of developing tasteless, colorless and odorless poisons.

In 1954, a K.G.B. defector described a secret lab near the agency’s Lubyanka headquarters and “experiments on living people.”

The agencies developed an arsenal of lethal, hard-to-trace poisons that, analysts of Russian security affairs say, is still in use.

The Arab-born terrorist known as Khattab died in 2002 in his mountain hide-out in Chechnya after opening a letter laced with a form of sarin, a nerve agent.

In 1995, a Russian banker, Ivan K. Kivelidi, died after coming in contact with cadmium, which is deadly to the touch.

His secretary died of the same symptoms, apparently because the poison had been spread on an office telephone handset.

In 2008, Karinna Moskalenko, a Russian lawyer specializing in taking cases to the European Court of Human Rights, fell ill in Strasbourg, France, from mercury found in her car.

And in one case, a Bulgarian dissident, Georgi Markov, was killed on Waterloo Bridge in London in 1978 with an umbrella tipped with a pellet of ricin.

In 1971, a year after he won the Nobel Prize for literature, Aleksandr Solzhenitsyn survived a poisoning attempt.

Ricin, made from castor beans, was probably involved, according to news media accounts and a biography of the dissident writer.

Ukraine’s former pro-Western president, Viktor A. Yushchenko, was left with his face disfigured after a dioxin poisoning — likely concealed in a meal of boiled crayfish — that Mr. Yushchenko attributed to Russian assassins.

The attempt on Mr. Kara-Murza’s life turned out to be one of those mistakes, though that was not immediately certain.

As his colleagues looked on surprised, Mr. Kara-Murza’s sweat-covered head flopped down onto a table.

The poison threw him into a weeklong coma with a puzzling range of symptoms, from swelling in his brain to kidney failure, giving his legs and arms a blue hue, his wife, Yevgenia, recalled.

He endured nerve damage that left him limping, but has otherwise made a full recovery.

A French laboratory found heavy metals in his blood but was unable to identify a specific poison or explain how he might have ingested them accidentally.

Mr. Kara-Murza, 34, has insisted that police open an investigation.

He is convinced he ingested the poison during a flight on Aeroflot.

If so, it would not have been the first time such an episode occurred.

In 2004, the opposition journalist Anna Politkovskaya drank poisoned tea on an Aeroflot flight but survived.

She was shot and killed in her apartment elevator two years later.

“How can you protect yourself?” Mr. Kara-Murza’s wife asked.

“What can you do? Not eat? Bring your own lunch everywhere? How can you predict a poisoning?”

Some do take precautions.

Garry Kasparov, the former chess champion and now an opposition figure, has long had bodyguards carry bottled water and prepared meals for him.

In a chilling epilogue to Mr. Kara-Murza’s ordeal, a warning appeared in February on the Instagram account of Ramzan A. Kadyrov, the leader of Chechnya.

It showed Mr. Kara-Murza outside the European Parliament in Strasbourg, where he was speaking in favor of sanctions against Russia.

He was in cross hairs, with the caption:

“Those who haven’t understood will understand.”