Yards From War, Miles From Peace

July 01, 2016
AVDIIVKA, Ukraine -- Most of the fighting here takes place at night, when deep thuds of artillery and the staccato sounds of gunfire routinely fill the air. 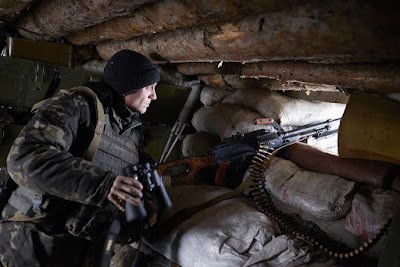 The Ukrainian army’s 128th Brigade occupies a former mine at this extreme front line of the war against separatist forces, connected to Ukraine-held territory by one road that bisects a dense anti-tank minefield designed to thwart pursuit if government troops were forced to retreat.

The brigade has witnessed a steady rise in the aggressiveness of the fighting over the last two months.

Col. Bandar Balkovnic, the unit’s second in command, points to the massive craters in grounds of the mine’s compound, holes in the walls and ceilings and fragments from the shoulder-fired 82 mm rockets, mortars and 152 mm artillery shells as evidence of what he and his troops have most recently endured.

“During the days, they use guns to start shooting – morning, day and evening – and artillery at night,” Balkovnic says.

“We use guns but don’t use artillery because we don’t have it.”

The spike in hostility is drawing the world’s attention back to this simmering 2-year-old conflict, in which a shaky cease-fire has suppressed much of the outright combat between the nation’s army and pro-Russian rebel forces propped up by Moscow who wish to break away from Ukraine.

Balkovnic, a 25-year army veteran, repeats a common complaint among Ukrainian soldiers here, that separatist forces and their Russian backers use artillery despite a strict prohibition under a 2015 cease-fire agreement negotiated in the Belorussian city of Minsk.

They say the separatists hide their artillery among the civilian population, making it all but impossible for the Ukrainian army to target it without killing innocents.

The Ukrainians also say the rebels use tactics with the sole purpose of antagonizing them to goad them back into fighting, such as mounting lights on wheelbarrows and having farmers push them down roads at night to make it appear as though tanks are approaching the cease-fire line.

Reports have also emerged of sophisticated electronic warfare from the pro-Russian side, such as sending “reverse text messages” to Ukrainian soldiers’ cellphones encouraging them to quit.

Asked whether he would like to violate the truce and return fire, Balkovnic, like all of his comrades who spoke to U.S. News, offers a short response.

“It is our land. And we have to remove them from our land,” he says.

It won’t be easy.

The conflict, which began in 2013 with widespread protests among pro-Western Ukrainians upset with their country’s tilt toward Russia, is currently at something of an impasse.

The separatists mount heavy opposition through forces that receive arms, supplies and support from Moscow, and which most observers believe actually includes experienced Russian paramilitary troops operating out of uniform.

Russian President Vladimir Putin has masked arms convoys into the disputed areas as humanitarian aid and only recently admitted Russian involvement in the conflict, but he still denies regular forces are on the ground.

He has, however, acknowledged the threat that the country’s “civil war” poses to a population of ethnic Russians in the east, many of whom descended from the workers the Soviet Union sent to the industrial centers in this largely agrarian environment known as Donbass.

“We cannot leave the people residing in southeastern Ukraine at the mercy of nationalists,” Putin said in December.

“It's not only the Russians, but also other Russian-speaking people, who rely on Russia.”

He invoked similar rhetoric when he backed a March 2014, so-called referendum in Crimea that cleared the way for Russia to annex the strategic peninsula, sparking fears that he is intent on seizing as much Ukrainian territory as he can, despite assertions to the contrary.

Following the populist movement that saw the ousting of a president friendly to Moscow, the separatist forces here declared themselves to be independent states known as “People’s Republics” of Donetsk and Luhansk, or DPR and LPR.

It appeared at the time as if the Ukrainian army’s intense response would be enough to quell the uprising, until Russian forces crossed the border and bolstered the separatists, effectively beating back the Ukrainian troops.

U.S.-led equipping and training along with two years of hard-fought battlefield experience have transformed what was once a decaying post-Soviet collection of individual battalions into a more coherent and effective fighting force.

But now, the conflict has stalemated.

“They can’t beat the Russian army, and they’ve had that hammered home a couple of times,” says Steven Pifer, a former U.S. ambassador to Ukraine, now with the Brookings Institution.

Allowing the standoff to fester, however, is risky.

“The longer this goes on,” Pifer says, “there is the prospect that it could flare up, even if nobody in Kiev and nobody in Moscow wants it to happen.”

The Organization for Security and Cooperation in Europe, the group tasked with monitoring the cease-fire, points to Avdiivka as the potential flashpoint that could lead to a resumption of all-out war.

The ongoing violence around this town is a testament to its strategic value and the commitment of both sides to continue fighting for it.

A lucrative chemical plant sits just a couple miles to the west of the formal cease-fire line, which runs along a key road connecting the separatist-held city of Donetsk to the town of Horlivka to the northeast.

A filtration plant along that road provides the only source of potable water for the more than 400,000 people who remain nearby.

The region had been controlled by separatist forces early in the war, as evidenced by the artillery and shrapnel scarring on the sides of most apartment buildings near the conflict zone, where many local residents still live.

It has subsequently been wrested back by the Ukrainian army, which gained some momentum last year before returning to this cease-fire line.

Casualties from intermittent attacks now approach an average of one every day or two – the highest since August of last year and representative of a gradual upward trend in the fighting.

Cease-fire violations have also spiked, numbering in the thousands in April, May and June.

But the leader of the OSCE mission says it isn’t just the separatists who are to blame.

“The two sides are moving far too close to one another,” says Alexander Hug, a former Swiss army officer now serving as the deputy chief of the OSCE’s Special Monitoring Mission for Ukraine.

“This leads to tension, and these tensions of course often end up in periods of intense fighting.”

The Minsk agreement called for a withdrawal from the cease-fire line.

It prohibits the use of artillery as well as other 21st century warfighting tools, like the surveillance drones that both sides continue to use heavily, Hug says.

Instead, the combatants here have advanced to within hundreds of yards from one another along multiple fronts.

Balkovnic reports enemy sniper positions have come as close as 200 feet from his brigade’s positions.

“The lack of trust is certainly something that is a problem,” Hug says, “but it applies to both sides equally.”

Ukrainian President Petro Poroshenko, whose tenure has been defined by trying to hold together the deep fissures that allowed for his ascension, has been among the most vocal supporters of the Minsk talks and subsequent internationally negotiated cease-fire agreement, to which Russia only agreed after Kiev signed off on ambitious concessions, including new elections in contested regions – a prospect so far stymied by the ongoing war.

Even if Poroshenko wouldn’t condone a planned increase in fighting against the separatists, that doesn’t mean the military couldn’t become engaged in yet another bout of fighting.

And many young officers at the front lines are growing impatient with waiting.

“All the Minsk, it’s bullshit,” says a Ukrainian army lieutenant in command of three roads leading to separatist territory and the trench network at the farthest points forward.

He asked only to be referred to as Alexander.

“It’s working not for us, only for the Russians. It works only for them, not for us. For us it's always worse. Minsk is tying our hands.”

He points to a fresh, roughly 8-foot crater just a few yards from a new observation post at the head of one of the trenches.

It’s proof, he suggests, that the separatists’ ability to target the Ukrainian troops using drones and radar systems has accounted for more precise attacks in recent days.

Nearby, a similar hole sits at the center of a wide circle of shrapnel damage that ripped apart cherry trees in a farmer’s small orchard.

The soldiers here say the family had to return to their home just off the front lines because they couldn’t afford to stay where they had fled.

“Politicians want to show they’re doing something,” he says of the cease-fire negotiations.

“But really they’re doing nothing.”