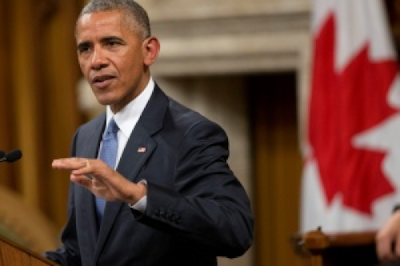 President Barack Obama addresses the Canadian Parliament in the House of Commons in Ottawa on Wednesday, June 29, 2016.

In a historic speech in Canadian parliament US President Barack Obama has once again called Russia an aggressor state, and called on the allies to send a strong message of solidarity and commitment at the next week's NATO summit in Warsaw.

"When nations violate international rules and norms, such as Russia's aggression against Ukraine, the United States and Canada stand united, along with our allies in defence of our collective security," Obama said to Canadian lawmakers.

Obama, the first in more than 21 years US chief executive to speak in Canada's parliament, urged Canada to "contribute its full share" to the North Atlantic Treaty Organization:

"And as your ally and as your friend, let me say that we'll be more secure when every NATO member, including Canada, contributes its full share to our common security," Obama said.

"Because the Canadian Armed Forces are really good," he added.

A day after US President's remarks Canadian media reported that Ottawa will deploy 1,000 soldiers in Latvia.

The Canadian troops will join a total of 4,000 soldiers NATO is deploying to the Baltic states and Poland to help deter the Kremlin's threat after its actions in Crimea and eastern Ukraine.

Unknown said…
This comment has been removed by the author.
9:29 AM

Unknown said…
This is truly a great read for me. I have bookmarked it and I am looking forward to reading new articles. Keep up the good work!. - fnaf

Simuka Rafeal said…
Live, do not care about what others say about you, because only you know who you are.
Unblocked, friv 2 games, abcya