July 30, 2016
AVDIIVKA, Ukraine -- As the afternoon shadows grow long, nocturnal creatures begin to stir. A stray cat rises from a nap, stretches and trots off to hunt. Overhead, swallows swoop and screech in the deepening twilight. 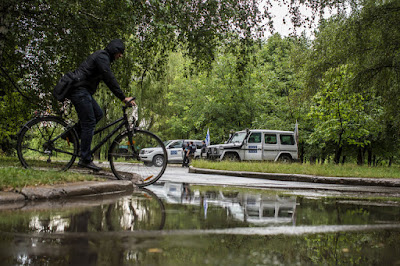 A team of monitors from the Organization for Security and Cooperation in Europe conducted a monitoring mission in Avdiivka, Ukraine.

Soon, the human inhabitants of this town in eastern Ukraine set about their evening rituals.

Green-clad soldiers strap on their helmets and load their guns, while white-clad European cease-fire observers pocket their notebooks, climb into their cars and drive away.

And then the fighting starts.

This improbable routine between soldiers and monitors with the Organization for Security and Cooperation in Europe plays out nightly, illustrating the glum quagmire of the Ukraine war, now entering its third year.

“I never see them here at night,” said Tatyana Petrova, whose apartment looks over a parking lot that is a frequent listening post for the monitors.

“In the evening, I look out and they are gone, and then the concert starts.”

Avdiivka, a warren of back streets eerily overgrown with years of untended vegetation, is the most troubled flash point along the so-called line of control separating Russian-backed separatists from the Ukrainian Army.

But they patrol only during the daytime.

This adherence to bankers’ hours and other signs of weakness in their mandate are doing little to help end the only active war in Europe, at a time when the Continent’s security is already unraveling from terrorism and tensions over migration.

Typically, the O.S.C.E. reports from dozens to hundreds of cease-fire violations daily.

The Ukrainian Army reports several deaths per week, commensurate with the casualties of the United States Army during the Iraq war.

The United Nations says nearly 10,000 people have died in eastern Ukraine since March 2014.

Out on patrols, whenever military commanders on either side object to their presence, the monitors turn and leave, no questions asked.

During one recent patrol I accompanied, a Ukrainian military nurse shooed monitors away.

The mission now has about 100 budgeted yet unfilled positions, partly because European public employees are loath to interrupt long summer vacations.

It is a seasonal dip, O.S.C.E. officials say, caused by member governments struggling to recruit for summertime rotations.

Emblematic of the group’s weak hand, one key mission of observers stationed at two crossing posts on the Russian-Ukrainian border has conceded to Russian pressure not to use binoculars, lest the observers observe too much.

Britain’s ambassador to the Vienna-based security organization, Sian MacLeod, quipped on Twitter about that concession, “What’s to hide?”

In March, Russia’s continued refusal to permit the use of binoculars at these sites attracted harsh criticism from the American mission’s chargé d’affaires, Kate Byrnes.

In response, Russia’s ambassador, Aleksandr K. Lukashevich, said that “the possibility of using binoculars was being considered.”

And yet in June, the matter was still unresolved, with the European Union issuing a statement condemning Russia for obstructionism in “small measures, such as the use of binoculars.”

No progress has been made, largely because the 57-nation group, which includes Ukraine and Russia, makes decisions by consensus.

The group’s mandate is limited to peace monitoring, not peacekeeping — an important distinction.

The teams driving along potholed roads in armored, white Toyota Land Cruisers are not supposed to become human shields separating combatants, but rather to remain close enough to observe the fighting.

“Becoming the buffer, or the shield, is not our role and would exceed our mandate,” Alexander Hug, the Swiss diplomat who leads the on-the-ground monitoring as deputy chief of the mission, said in an interview.

The mission has about 600 observers deployed along the front line, he said.

Mr. Hug said instances of the pro-Russian side blocking access for observers had doubled over one weeklong reporting period this month, leaving the mission little recourse but to report the obstructions.

To be sure, individual monitors undertake grave risks for an unambiguously noble goal of ensuring an impartial, third-party presence along the front, discouraging flare-ups and saving civilian lives.

The O.S.C.E. has opened “forward patrol bases” in hotels in small towns more stable than this one, and leaves video cameras rolling at night.

And it recently received mobile homes paid for by Switzerland, painted blue and white, so monitors could spend the night in more remote locations.

But the organization is still struggling to adapt to the circadian rhythm of a war fought mostly at night.

Its absence after dark is a striking feature of the Ukraine conflict.

“We call them deaf, dumb and blind,” said the Ukrainian military nurse who ordered the observers out of her field hospital.

She offered only her nickname, Romashka, a typical practice for soldiers here.

On a recent afternoon in Avdiivka, whose prewar population of 35,000 people has decreased by about half, monitors wrapped up at the close of business at 5 p.m., as usual.

By and large confined to their hotels after dark, monitors say they pass the time watching television, surfing the internet or chatting with colleagues.

They can listen for violations from inside the hotels.

The sun set through a beautiful layer of pink, horsetail clouds and then it was officially night.

A distant shot rang out.

High above, a rebel spotter drone buzzed past.

To cover the increase in violence after observers left, I awaited the onset of the nightly fighting in a trench on the town’s edge, overlooking a reedy swamp that acts as a buffer zone.

The metallic zing of a bullet flew past overhead.

Soon enough, shooting erupted all around, with bullets fired from the pro-Russian line smacking into the abandoned country houses where the Ukrainian conscripts sleep during the day.

Soldiers ran about, crouching for cover.

Pvt. Denis Krylov ran for the trench wearing just the striped military undershirt he had been sleeping in during the day.

“You arrived for the start of the disco,” Sgt. Ruslan Pilipenko, the commander of this position, said of the nighttime fighting.

“Everybody is fed up with this war,” Private Krylov said.

“People want to go on with their lives.”

He told me ruefully he had left his meal, a bowl of borscht, unfinished in the house that was hit.

The shooting escalated until around 9 p.m., when heavy artillery that neither side is supposed to deploy opened up somewhere in the Ukrainian rear, firing toward rebel positions with distant booms.

Ambulances streaked through the streets, carrying the wounded.

The fighting, soldiers said, followed the typical nighttime rhythm, even if it seemed more intense than usual.

That evening, three Ukrainian soldiers died and 16 were wounded along the line of control.