US, NATO Thumb Noses At Russia With Massive War Games In Ukraine

June 28, 2016
KIEV, Ukraine -- Nearly 2,000 troops from the United States and allies launched a massive military exercise in Ukraine Monday, the latest in a series of war games that NATO officials say would simulate counterattacks against "Russian aggression." 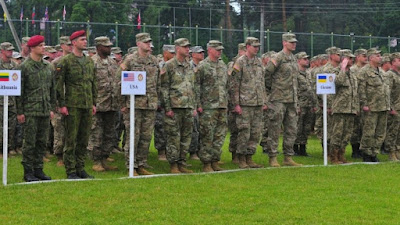 "Today’s presence here of such a powerful cohort of our partners and comrades in arms demonstrates the broad international support for the struggle of the Ukrainian nation for sovereignty and territorial integrity as a democratic European state,” Ukrainian Col. Eduard Moskalyov said.

The exercise, known as Rapid Trident 16, is set to last two weeks in western Ukraine.

It includes troops from Ukraine and 12 other nations, members of NATO or its Parnership for Peace program: Bulgaria, Canada, Georgia, Great Britain, Moldova, Lithuania, Norway, Poland, Romania, Sweden, Turkey and the United States.

Russia, which took over the Crimean Peninsula in 2014, ramped up the pressure earlier this month after NATO defense ministers agreed to station additional forces in Estonia, Latvia, Lithuania and Poland -- all near Russian borders.

"Those measures significantly erode the quality of regional security, in fact turning central and eastern Europe into an arena of military confrontation," Russia's ambassador to NATO Alexander Grushko said, adding that NATO's decision "directly infringes on our legitimate security interests" and "won't be left unanswered."

Grushko also criticized NATO's pledge to offer non-lethal assistance to Ukraine, saying it could encourage its reluctance to abide by the Minsk peace agreement.

The deal has helped reduce hostilities in eastern Ukraine, but fighting has continued and a political settlement has stalled.

More than 9,400 people have been killed in fighting between Ukrainian forces and Russia-backed separatists in eastern Ukraine, which erupted in April 2014 weeks after Moscow's invasion of Crimea.

Unknown said…
This comment has been removed by the author.
8:02 AM

Unknown said…
Such a very useful article. Very interesting to read this article.I would like to thank you for the efforts you had made for writing this awesome article.

Unknown said…
The blog or and best that is extremely useful to keep I can share the ideas. Age Of War 2
Big Farm | Slitherio | Tank Trouble
Of the future as this is really what I was looking for, I am very comfortable and pleased to come here. Thank you very much.
Happy Wheels | Goodgeme Empire | Slither.io