June 04, 2016
WARSAW, Poland -- The Ukrainian Ministry of Defense is aiming to acquire 30 new vessels for the country’s Navy by 2020, and to upgrade its training facilities under a program worth 500 million hryvnia (US $20 million), the ministry said. 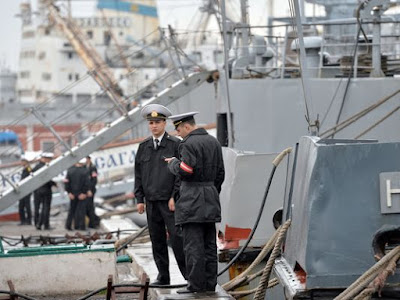 Ukrainian sailors stand next to their warships in the southern Ukrainian city Odessa on May 3, 2015. The country plans to boost its Navy fleet by 2020.

The two programs are related to Ukraine’s ongoing military efforts in the country’s eastern part, where the Ukrainian Armed Forces have been combating Russia-backed insurgents.

Currently, the Ukrainian Navy "is actively involved in the anti-terrorist operation in the provinces of Donetsk and Luhansk, prepared to counter a seaborne armed aggression," the ministry said in a statement.

The planned acquisitions are expected to enable a "radical modernisation" of the Ukrainian Navy's combat capabilities, the statement said.

Most recently, the Defense Ministry signed a contract with the state-run Leninska Kuznya shipyard under which the Kiev-based shipbuilder will supply two landing craft to the Ukrainian Navy.

Should the latest deal be carried out as planned, the Defense Ministry could decide to award further shipbuilding contracts to Leninska Kuznya.

Some deals could also be awarded to the shipbuilding division of Ukraine's leading defense group Ukroboronprom.

In addition to developing the capabilities of the Ukrainian Navy, the ministry also wants to enhance the training capacity of the country’s military.

As a result, the country’s International Peacekeeping and Security Centre (IPSC) in Starychi, in Ukraine's western part, and its training units will be upgraded until the end of 2020, according to the minister.