June 04, 2016
MOSCOW, Russia -- A survey by an independent Moscow-based polling agency has found that Russians believe their country has a trio of main enemies – the United States, Ukraine and Turkey, in that order. 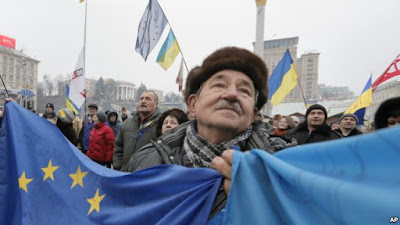 A pro-European Union activist with Ukrainian and European Union flags rallies with others in Independence Square in Kyiv, Ukraine, Dec. 20, 2013. The protests ended up toppling Ukraine's Russia-backed president Viktor Yanukovych.

The findings of the Levada Center poll, conducted among 2,400 people across Russia May 20-23, contain little new data other than Turkey's inclusion in the top enemies list. Until recently, a majority of Russians viewed Turkey either neutrally or positively.

According to polling data going back a number of years, the United States has long been seen by a considerable part of the Russian population as a potential threat and a “source of global evil.”

The Levada Center’s poll found that the level of anti-American and anti-European sentiment in Russia is now higher than it was before Russia annexed Crimea from Ukraine in early 2014, but lower than it was at the start of 2015.

The polling agency found that negative attitudes toward Ukraine have increased, with 48 percent naming it as one of the five nations most hostile to Russia, up from 37 percent in 2015.

The number of respondents who named Turkey as one of the five most hostile countries jumped to 29 percent in the latest poll, up from just 1 percent in 2015.

Last November, Turkey shot down a Russian fighter jet it said had crossed into its airspace, despite warnings.

The United States’ rating remained basically unchanged: 72 percent of the respondents in the latest poll named it one of the five nations most hostile to Russia, down slightly from 73 percent in 2015.

‘Aggressive’ propaganda blamed Belarus, Kazakhstan and China were named as the top three countries most friendly to Russia (although China’s rating dropped from 43 percent in 2015 to 34 percent in the latest poll), followed by India, Armenia and Cuba.

Syria came in seventh place, but its “friendly” rating showed the greatest increase (from 2 percent of the respondents last year to 10 percent in the latest poll).

The Levada poll also found that support for Russia joining the European Union has dropped dramatically over the last seven years.

In 2009, 53 percent of respondents said they supported Russia becoming an EU member and 21 percent opposed it.

In the latest poll, 56 percent said they were against Russia joining the EU, while only 24 percent supported it.

The director of the Levada Center, Lev Gudkov, told VOA that the results of this poll show the impact of an “extraordinary and extremely aggressive anti-Western and anti-Ukrainian propaganda" campaign that started after popular protests ousted Ukraine’s Russia-backed president, Viktor Yanukovych, in early 2014.

According to Gudkov, Russia’s leadership has a "paranoid fear" of “color revolutions” like Georgia’s 2003 Rose Revolution and Ukraine’s 2004 Orange Revolution.

Thus, the aim of Moscow's anti-Ukrainian propaganda campaign was not only to discredit Yanukovych's successors, but to subvert the liberal, democratic values that motivated those who participated in the protests that led to his ouster, said Gudkov.

Another aim of the anti-Ukrainian propaganda is to discredit Russia's democratic opposition, he said.

The efforts to discredit Ukraine’s pro-Western government and Russia’s democratic opposition, said Gudkov, have been accompanied by “an extremely powerful and, in its own way, effective anti-American campaign" that is still being carried out via Russia's TV channels daily.

“We see the results of this: more than 70 percent (of respondents) expressed clear hostility toward the United States," he said.

With Russia's economy faltering, the Kremlin needs to have an external enemy in order to mobilize Russian society, “because a crisis is approaching and the regime does not feel very confident, despite all the high ratings and demonstrative support of the population," Gudkov said.

That is why the authorities are trying to create an atmosphere in which the Russian public feels the country is “on the brink of war,” he added.

“There is a certain dependence of public opinion on the national media, which is centralized in Russia, and which, as a rule, expresses a uniform position on key issues concerning Ukraine,” Magda told VOA.

The results from the Levada Center’s polls, he said, show just how potent an effect this “unified propaganda machine” has.

Still, Magda added that this situation could “change radically” in a few years, as a result of “pluralization of the press” and “democratic processes" inside Russia.