June 10, 2016
BRUSSELS, Belgium -- Hopes in Georgia, Ukraine and Kosovo that the European Union would approve their visa-free access to the bloc by the summer have faded in recent days amid a raft of new concerns raised by the bloc’s biggest member states. 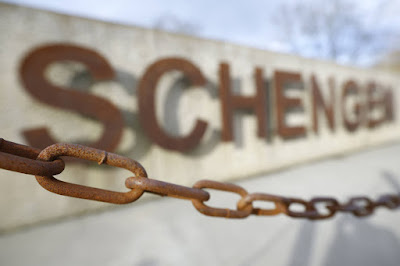 The deal would give millions of citizens from Georgia, Ukraine and Kosovo visa-free access to the border-free Schengen zone.

The issues range from German concerns about organized crime by Georgian gangs to worries in France that the visa deals could create new security vulnerabilities at a time of heightened terror fears.

EU officials and diplomats now say that September appears to be the earliest date that EU governments and the European Parliament could sign off the agreements.

The deal would give millions of citizens from these countries who hold biometric passports visa-free access to the border-free Schengen zone covering most EU nations.

The U.K. and Ireland are outside Schengen.

For the bloc, the visa-free regimes are a key tool for binding their neighbors closer and for advancing reforms in those countries.

Delays could deplete pro-western forces in countries like Georgia and Ukraine, who are struggling with their hostile Russian neighbor.

In recent months, the European Commission, the EU’s executive, has recommended visa-free status for Georgia, Ukraine, Kosovo and Turkey.

The latter’s bid has already been put on the back burner with EU and Turkish officials now targeting an October deal as Ankara completes several final tasks.

The other three countries’ bids were expected to move rapidly.

On Wednesday, however, ambassadors from the EU’s 28 nations failed to gather enough support to back Georgia’s bid.

Georgia has been waiting for a decision on its visa-free regime since December.

But in recent days, German officials have argued that Berlin’s backing for a deal is contingent on more efforts to stamp out Georgian organized crime gangs that German authorities blame for a spate of house robberies, German and EU officials say.

On Wednesday, Berlin asked the commission to report on Georgian crime gangs across the bloc, according to people familiar with the discussions.

Other countries have also slowed down approval.

Italy and France have said a decision should await the approval of new rules which will make it easier to suspend visa-free regimes in case of abuse.

The European Parliament is only expected to formally back the changes in September.

Diplomats say there are some EU governments who want to hold up any decisions on Georgia, Ukraine and Kosovo until they consider Turkey’s visa-free application.

That has created growing concerns in Kiev, Tbilisi and Pristina.

“Brussels literally has no more reasons to delay,” Kosovo’s President Hashim Thaci told The Wall Street Journal on Wednesday, saying his government will complete its final visa-linked task before the summer by pushing through parliament a border agreement with Montenegro.

Mr. Thaci said he doesn’t want to interfere in decisions by the EU governments but that he hoped Kosovo’s bid would win backing within three-to-six months of the commission’s May recommendation.

“Kosovo should not be held hostage to any disagreements between—in this case Brussels and Ankara. We have done our homework,” he said.

Georgia’s government was hoping the visa-free bid would boost pro-European parties ahead of elections in October.

During a visit to Brussels on Wednesday, Georgian President Giorgi Margvelashvili made only a brief public mention of the issue but a senior EU official said he lobbied hard for the visa-free bid in meetings with top officials.

There are similar concerns in Ukraine, where President Petro Poroshenko has placed the issue high up his agenda since last year.

On Thursday, Mykola Tochytskyi, Ukraine’s ambassador to the EU, said he hoped EU governments and the parliament would formally approve Kiev’s visa bid by early autumn at the latest.

He warned however that any further delays and linking Ukraine’s bid with others would hurt the EU’s credibility.

That will add to domestic pressure on the government when it is trying to push difficult legislation through parliament connected to its economic program and the Minsk peace agreement with Russia.

“It’s very difficult to explain at home…why we should be linked to other countries for purely political reasons,” Mr. Tochytskyi said.

“The key issue is not to stop this process (of approval).”