Back In The USSR? Ukraine Rebels Aim To ‘Bring Up Patriots’

June 19, 2016
DONETSK, Ukraine -- In camouflage uniforms and red caps, a group of young people gather in the Ukrainian rebels’ de facto capital of Donetsk to sing patriotic songs and discuss the conflict. 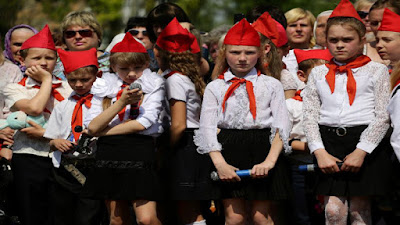 They are members of Patriot, a youth club set up by separatist authorities in the self-proclaimed republic who are increasingly glorifying the Soviet past.

The rebels — who view the government in Kiev as right-wing nationalist “fascists” — hope to instill loyalty in the young people as they liken their battle to the Red Army’s World War II fight against the Nazis.

They have drawn inspiration straight from the Soviet era “Pioneer” movement, a kind of Communist Scouts that most children would join at age 10.

Around the campfire, the Pioneers in their distinctive red kerchiefs and caps were taught to revere Lenin, just as the Patriots, with their red caps, sing the pro-Moscow rebels’ praises.

“No one will bring us to our knees, Donetsk guys are made of steel,” spits out 23-year-old Alexander in a “patriotic rap” song he wrote and performed for the group.

They meet monthly at Donetsk’s World War II museum, which is decked out with Soviet flags and military banners, as portraits of Stalin have started cropping up in the city centre.

Only 55 school children and college students have joined the movement since it started just over a year ago, but the organisation has big plans.

“Our goal is to bring up patriots, to develop the new Donetsk People’s Republic as a state,” said its chief Lyudmila Mikhaleva.

Yelizaveta Kozlovskaya, 18, enrolled after her parents dissuaded her from volunteering to fight Ukrainian forces.

But “if someone attacks my family with machine guns, then I will fight back. I will defend my home,” says the round-faced college student.

More than 9,400 civilians and fighters from both sides have perished since the revolt broke out in April 2014.

About 1.8 million people, including 230,000 minors, have also fled the tension in the rebel-held east, according to UN figures.

Kozlovskaya’s own parents and brother moved to Russia, which is accused by Kiev and the West of buttressing the rebels and sending regular troops across the border — claims that Moscow denies.

But Kozlovskaya insisted on staying behind with her grandmother.

“The young people are leaving Donetsk. They say this isn’t their war and they don’t want to die. But it’s my city, why shouldn’t I defend it?” she says.

Membership is on a voluntary basis and the Patriots offer no weapons training, unlike some other youth groups cropping up that do carry out military drills.

Senior rebel officials and fighters often join the meetings, encouraging Patriots to learn about relatives and “heroes” who fell both in World War II and the current conflict.

The rise of such groups has paralleled the war-torn east’s growing nostalgia for Soviet days, and at least a dozen are now operating in the rebel-held area.

The mood was clear at a May 9 parade in Donetsk to celebrate the Allied win over the Nazis in 1945, when many children wore red caps and kerchiefs like the Soviet Pioneers.

“We are against any initiative in which children are taught to hate or even kill,” she told AFP.

One group tried to call itself the Zakharovists for rebel leader Alexander Zakharchenko, just as the Soviet Pioneers were called “Leninists.”

Its members would be “successors to the glorious deeds of the Pioneer movement in the Soviet Union”, said separatist negotiator Denis Pushilin.

But Zakharchenko scotched the idea, saying “it’s out of the question for a movement to be named after me,” even if he praised the principle of the group.

His veto disappointed Ivan Fedko, 15, whose grandfather was a member of the old Pioneers. “Zakharchenko is my idol,” he said.

"So I would join such an organisation and I would wear such a badge.”

Not all agree, including Fedko’s school friend, 18-year-old Nikita Tishchenko.

“I wouldn’t join the Zakharovists because I think it’s a return to the Soviet Union,” he said.

“And I don’t want to go back there because it was the last century. There was a different political system then — it was totalitarianism.”

I agree with every point of Mr. Valentine Torba.

No elections in Donbas special territories until safety of people is implemented.
7:19 PM