May 15, 2016
KIEV, Ukraine -- Press freedom advocates have blasted a Ukrainian initiative tied to the Ministry of Interior that published the names of journalists who reported from war-torn territory controlled by Russian-backed separatists. 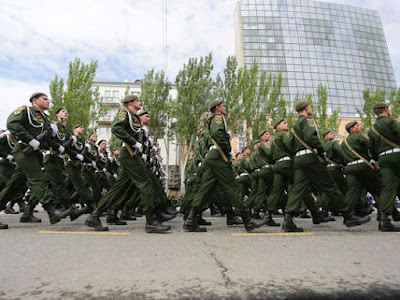 Pro-Russian separatists of the self-proclaimed Donetsk People's Republic march during the Victory Day parade in Donetsk on May 9, 2016. Tanks and rocket systems rolled through the rebel bastion of Donetsk in east Ukraine on May 9 as pro-Russian insurgents celebrated the 71st anniversary of the Soviet win over Nazi Germany in WWII.

A pro-Ukrainian hackers' collective that calls itself “Peacemaker" posted a spreadsheet listing journalists’ names and in many cases their email addresses and phone numbers to its website.

"We don't know what consequences there will be after we publish it, but we are sure that it should be published as these journalists are in cooperation with terroristic organizations," the group said in a statement accompanying the spreadsheet.

Press freedom advocates Reporters Without Borders and the Committee for the Protection of Journalists condemned the publication and urged journalists on the list to take extra precautions to secure their email accounts and digital information.

The list of thousands of journalists included reporters from the BBC, CNN, the New York Times and Al Jazeera.

Vice reporter Simon Ostrovsky, who was detained by Donetsk rebels in 2014 is on the list, as is USA TODAY reporter Oren Dorell, who reported from militant-held Donetsk in 2014 and 2015.

Ukraine’s environment for journalists improved from “not free” to “partly free” after the ousting of pro-Russian President Viktor Yanukovych in January 2014, according to a ranking by Freedom House.

Several journalists were harassed, beaten and killed during the Euromaiden protests that resulted in Yanukovych’s ouster.

Elizabeth Trudeau, a spokeswoman for the State Department, said the hacking and publishing of media workers' personal information undermines the “critical role” of journalists, “particularly in countries where civil and political rights are fragile, and in areas of conflict where the hazards of reporting are at their most extreme.”

The Ukrainian Prosecutor General's Office on Wednesday announced that it has opened an investigation into the publication of the journalists' names under an article of the Ukrainian Criminal Code that covers “obstruction to journalistic activities.”

However, Anton Herashchenko, advisor to the Minister of Internal Affairs of Ukraine, said the Security Service of Ukraine would use the data to investigate how the pro-Russian separatist entities — “banana republics,” he called them — use propaganda to further their goals.

In a Facebook post, Hershchenko urged the Ukrainian parliament to “counter Russian propaganda efforts against Ukraine on the territory of Ukraine.”

Such efforts should include “control of the accreditation of foreign journalists and, above all, the Russian media in Ukraine and the expulsion of journalists in the case of establishing the facts of violations of Ukrainian legislation,” he wrote.

In addition to fighting with missiles, bullets and artillery, however, Ukraine is also confronting a determined information campaign emanating from Russia and the territory its supporters seized in Ukraine.

Russia and Ukraine’s Western allies have sparred over the identity of the combatants, their cause and the culprits behind deadly incidents ranging from artillery strikes to the downing of Malaysia Airlines Flight 17 in July 2014, which resulted in the deaths of 283 passengers and 15 crew members.

Western officials say it was shot down by a Russian or rebel anti-aircraft missile.

Russia says a Ukrainian fighter jet brought down the airliner to make Russia look bad in the West.