The Spirit Of Ukraine's Euromaidan Revolution Has Been Betrayed

May 09, 2016
KIEV, Ukraine -- Instead of able, technocratic leaders with strong ties to the West, we see a less reformist, less competent cabinet. 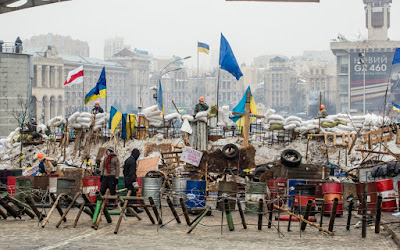 Groysman is a loyal party soldier of President Poroshenko.

He is both the youngest prime minister of Ukraine as well as the first Jew to hold this office.

When voted Mayor of Vinnytsia, he was the youngest mayor of any Ukrainian city and a successful one, too, at his re-election he received almost 78 per cent of the vote.

In a different time, these credentials might have sufficed to consider him a reformist force, but after the Euromaidan revolution, the benchmark was raised and it is far from certain if Ukraine’s new prime minister will clear the bar.

The immediate response by Western diplomats and Ukraine experts has been lukewarm at best: phrases such as will be measured by his results or benefit of the doubt generally summarise Groisman’s appointment.

But there is doubt.

Ironically, much of this suspicion is not necessarily linked to Groysman himself, but to the circumstances of how he obtained his position.

The current developments are very much the result of President Poroshenko’s power grab, a political manoeuvre that began with the appointment of the ineffective General Prosecutor Shokin.

This continued with the side-lining of foreign reformist technocrats like Abromavivius in the cabinet and concluded with a call for resignation of Prime Minister Yatsenyuk himself.

This was not a coup d’etat, just a political shake-up, the end of a political coalition, the price for jump-starting the Ukrainan reform-process again, or so it was claimed.

But what was the price for this re-boot?

Nothing more than the abandonment of the principles of the Revolution of Dignity.

The international reformist technocrats who joined the government in December 2014 have all gone.

It is painful and astonishing to see that Natalie Jareshko, the most accomplished Minister of Finance that Ukraine ever had, was let go without any official acknowledgment of her historic contributions to the Ukrainian nation.

Her departure is doubly painful, as for a brief moment, there was actually hope that she would become the next Prime Minister, making a real attempt to cut throught the Gordian Knot of Ukrainian politics.

Yet the self-serving Ukrainian parliament no longer pretends to represent the interests of the Ukrainian people.

Instead of able, technocratic leaders with strong ties to the West, we see a less reformist, less competent cabinet, full of Poroshenko loyalists, almost none of which speak any Western languages.

Furthermore, there has been a return of return of oligarch interests, as the new Prime minister and his cabinet were not even able to receive all the votes of their own coalition and required both 23 votes of Kolomoisiy’s Renaissance faction as well as 16 votes of the Will of the People group (another faction serving the interests of various oligarchs).

It is a distinctly wobbly coalition which required three attempts to pass the Groysman programme on his first day in office.

This does not bode well.

At this point, the international community must realise that any relevant significant reforms have happened despite of the efforts oft he Ukrainian parliament, not because of it.

Every positive change happened either at the expense of the Ukrainian people, the dismantled network of Yanukovich or it was a non-negotiable demand of the IMF and Ukraine's international partners.

The hope that the current coalition will be able to reinvigorate the reform process is nothing if not naive, and it is no surprise that the Western governments can barely hide their skepticism.

It is almost ironic, that with his departure, one almost begins to miss the former Prime Minister Yatsenyuk:

Despite his shortcomings and failures in politics, it was generally acknowledged that he was still the most competent Prime Minister Ukraine has ever had, but he too realised at his appointment that he was on a kmikaze mission.

However, while he no longer holds the office of prime minister, his mission is not yet over:

As faction leader of the People’s Front with 81 votes of the current coalition, he has the power to trigger snap elections should the Poroshenko/Groysman government not deliver on their promises made to the Ukrainian people.

Should he fail to do so, he might very likely trigger a third Maidan Revolution.