May 22, 2016
MOSCOW, Russia -- Russian performance artist Pyotr Pavlensky was convicted in a Moscow court of vandalism for a 2014 pro-Ukraine protest in St. Petersburg. 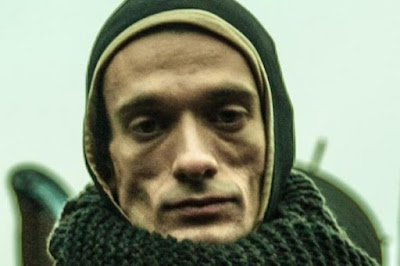 Russian performance artist was convicted thursday of vandalism during a 2014 pro-Ukraine protest in St. Petersburg, and awaits a trial for allegedly setting the doors of Moscow's Federal Security Service on fire.

Their performance was in emulation and support of pro-Western demonstrators in Kiev who burned tires to create smokescreens against snipers while protesting the government of eventually deposed president Viktor Yankovich.

Pavlensky was sentenced to a 16-month prison term Thursday but the case's statute of limitations had expired.

He remains in custody, awaiting another trial in which he is accused of setting fire to the main doors of Russia's Federal Security Service, or FSB, in 2015.

He was arrested and charged with damaging an object of cultural heritage; the maximum penalty for the crime is three years' imprisonment.

The artist is regarded as a provocateur in a country where politicized art is often met with government censorship.

Pavlensky sewed his lips shut in 2013 after members of the band Pussy Riot were imprisoned, nailed his testicles to the pavement in front of Moscow's Lenin Mausoleum in 2013 and wrapped himself in barbed wire at St. Petersburg's Legislative Assembly.

Each act was a protest against the government's limitations on citizen's rights.

After the attempted burning of the FSB doors, Pavlensky said in a statement, "The FSB acts using a method of uninterrupted terror, and maintains power over 146 million people. Fear turns free people into a sticky mass of uncoordinated bodies."