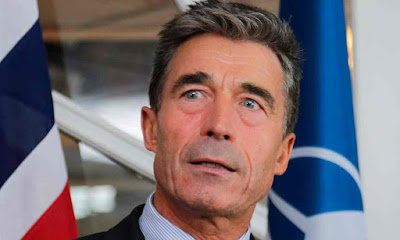 Anders Fogh Rasmussen’s appointment was described as an ‘ostentatious show’ with no ‘military or even practical purpose’.

Ukraine’s president has appointed a former NATO secretary general as a special adviser, drawing a derisive reaction from Russia.

Petro Poroshenko announced the appointment of Anders Fogh Rasmussen, the former prime minister of Denmark who was NATO secretary general from 2009 to 2014, on Friday.

MPs in Russia, which has viewed NATO’s eastward expansion as a security threat, were quick to speak out against the appointment.

“This is of course in large part a gesture, but it’s a gesture that will be backed up by actions. And it’s a hostile gesture,” Leonid Kalashnikov, deputy head of the foreign affairs committee in Russia’s lower house of parliament, told Interfax.

Konstantin Kosachyov, head of the foreign affairs committee in the upper house of parliament, called Rasmussen’s appointment a “ostentatious show” with no “military or even practical purpose”.

He likened it to Ukraine’s appointment of the former Georgian president Mikheil Saakashvili, who is now governor of Odessa, and other foreigners.

“All this buffoonery serves one goal: to keep Ukraine in the centre of attention with its western partners at any cost,” Kosachyov said.

“Because if this attention weakens, and they suggest that Ukraine engage in solving its own problems and no longer blame Russia or the ‘difficult legacy of the past’, it will be like death for the Kiev regime.”

Kosachyov added that it “isn’t pleasing” that Kiev would consult such an anti-Russian figure as Rasmussen.

On Saturday Poroshenko shared on Facebook an article quoting Kosachyov that was headlined “Russia isn’t pleased with the appointment of Rasmussen as Poroshenko’s adviser”.

On Thursday G7 leaders at a summit in Japan said sanctions against Russia would not be lifted until it fully implemented the Minsk peace plan for eastern Ukraine.

“If yesterday in those areas of Romania people simply did not know what it means to be in the crosshairs, then today we will be forced to carry out certain measures to ensure our security,” Putin said at a news conference in Athens with the Greek prime minister, Alexis Tsipras.

It is not clear what Rasmussen will focus on in his new position.

He said in a Facebook post that he would do his “utmost to promote security and reforms in Ukraine”, including in the fight against corruption.

He also called the security situation in eastern Ukraine, where a ceasefire with Russia-backed separatists has been frequently violated, “alarming”.

Rasmussen’s appointment in Ukraine and the Russian reaction comes days after the two countries cooperated on a high-profile prisoner exchange.

Unknown said…
Dear Prime Minister Groysman you must act honestly, fire Nasirov or you will destroy small and medium size business. You must shot down Tax police for good as soon as possible. No one will support you simply because you do little good thing her and there. As long as you will pretend that criminals such as Nasirov are suddenly, over night became a "Good Guy" you will continue to discredit yourself.