Orbita, A Ghost Of Chernobyl In The Heart Of Ukraine

May 22, 2016
ORBITA, Ukraine -- Missing from maps, a ghost town hides in the pine forests of central Ukraine, abandoned after the Chernobyl nuclear disaster but now filling with families fleeing the pro-Russian eastern separatist war. 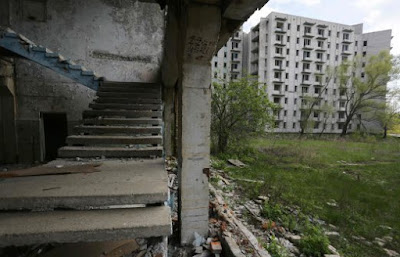 Orbita, a town whose existence was never registered by the Soviet authorities, was meant to house 20,000 workers at a nuclear power plant whose construction was abandoned after the Chernobyl disaster of April 1986.

The road through the woods that leads to the site is dilapidated, the sign marking the town’s entrance covered with rust, but two small playgrounds next to the abandoned buildings are clean and tidy.

Alina, a blonde 10-year-old with a grin and few worries on her mind, is playing next to her grandfather Vladimir Limarchenko, a man who has lived through many hard times.

Her family left their home in the former Soviet republic’s industrial heartland almost as soon as the fighting erupted two years ago, in a conflict which has since killed more than 9,300 people and forced 1.7 million from their homes.

“We did not know where to go. We just took a train to central Ukraine, where our relatives live. And by chance our fellow traveller at the station told us about Orbita,” said Limarchenko, who worked as a mechanic before retiring.

His new neighbour Vasiliy came to Orbita from the pro-Russian separatist city of Luhansk a few months ago and is now renovating a damp apartment in a five-storey building that stood empty for many years.

“My home was seized by the rebels so I have nowhere to return to.

Life is very expensive everywhere, but here I took an apartment on credit for a very low price,” said the 36-year-old, who lives on a disability pension.

“It is better to live in the forest than under fire,” he added.

Eight families from various parts of the war-scarred east have relocated to Orbita, attracted by its cheap prices and calm.

Orbita’s tale is tightly intertwined with that of Chernobyl, whose explosion spewed radiation across nearly three-quarters of Europe and left several thousand people dead or dying.

Plans for the town were initially drafted in 1970, the year ground was broken for the Chyhyryn nuclear power plant, whose construction was never completed.

Authorities of then-Soviet Ukraine planned to make Orbita the home of engineers from the plant – in what was intended to be the equivalent of Pripyat, a city of 48,000 built three kilometres (two miles) from Chernobyl.

In the 1980s, two nine-storey and two five-storey apartment buildings, a department store and all the necessary infrastructure were built.

But the disaster at Chernobyl, the world’s worst nuclear accident, meant plans to complete the Chyhyryn plant were quickly abandoned and because the Communist party had not yet opened an outpost in the town, it was not considered to exist officially and was not included on maps of the region.

Residents of Orbita employed to make preparations for the opening of the power plant lost their jobs and the town was quickly deserted, becoming a silent monument to the shock and terror caused by Chernobyl that reverberated through corridors of power in the Kremlin and around the world.

“There has been no heating or drinkable water here for a very long time,” Alina’s grandfather said. “We are similar to Chernobyl, except that there is no radiation. On the contrary – we have clean forest air,” he added.

The town, which is proving a draw for the poor from other parts of Ukraine, is currently home to about 50 families who are living in the two five-storey apartment blocks.

Most are elderly, live without heating and gas and have to trek to a nearby village for water.

They survive, for the most part, on meagre pensions and vegetables grown in their gardens.

But their hardscrabble existence is not made any easier by another nuisance – curious tourists who come to snap pictures of the peculiar town and who have decided to make it their home.

Kristina, a 19-year-old student from Uzhgorod, a city near Ukraine’s western border with Slovakia, came with a group of friends looking for a thrill.

“We wanted to visit Chernobyl, but it is very expensive. You can get here for free and there is no radiation,” she said.

“I was intrigued by the atmosphere of this ghost town,” she admits.

But Limarchenko is hardly impressed.

“The real ghost towns are now in the separatist east, in the places we came from.”