On Ukraine, The E.U. Should Not Follow Russia’s Script

May 28, 2016
WASHINGTON, DC -- European Union sanctions on Russia for the war it has waged in eastern Ukraine will be up for renewal in a few weeks, and some governments have been looking for a way to loosen them even though Russia has never observed the terms of a 15-month-old peace deal it signed. 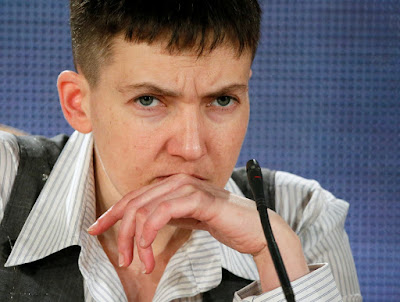 So it should not have been a surprise when Vladi­mir Putin’s government on Wednesday released the Ukrainian pilot Nadiya Savchenko, a national hero Moscow had been holding as a de facto hostage, in exchange for two Russian military officers captured inside Ukraine last year.

Putin not only got his soldiers back but also bought a chance that E.U. leaders will seize on his “concession” as a pretext to betray Ukraine.

For the moment, Ukrainians are rightly celebrating the return of Ms. Savchenko, a military pilot who was abducted from the front in eastern Ukraine while fighting with a volunteer battalion in 2014.

After illegally transporting her to Russia, the Putin regime blamed her for the deaths of two journalists who were killed by mortar fire inside Ukraine.

Though the evidence showed she had nothing to do with what was, in any case, a legitimate military attack, she was sentenced to 22 years in prison in March.

She went on a hunger strike, refused to cooperate in her trial and offered the judge a raised middle finger.

While in Moscow’s detention, she was elected to the Ukrainian parliament, making it virtually impossible for President Petro Poroshenko to implement Ukraine’s side of the peace deal before her release.

The prisoner swap consequently raises hopes among the sponsors of that deal, Britain and France, as well as in the Obama administration, that it will finally move forward.

The deal calls for elections in Russian-occupied territories and a modification of the Ukrainian constitution to give local authorities more power.

But Moscow has never complied with what should have been the first step of the process: a cease-fire and withdrawal of heavy weapons.

On Tuesday, even as the prisoner swap was being arranged, Ukrainian authorities said seven of their soldiers had been killed and nine wounded by shelling and other attacks in the previous 24 hours.

E.U. leaders have repeatedly resolved not to lift economic sanctions on Russia until the peace deal, known as Minsk 2, is fully implemented and Ukraine regains control of the border with Russia.

The E.U.’s foreign policy chief, Federica Mogherini, told us this month that she expected a renewal of the sanctions before they expire in July because Russia had not met its Minsk obligations.

Putin evidently has no intention of complying with the deal.

Instead, he is hoping to use continued conflict in Ukraine to destabilize the shaky democratic government in Kiev while inducing the Europeans to lift or loosen sanctions anyway.

Some in Europe will be tempted to follow Moscow’s script, which would lead to the destruction of a free and independent Ukraine.

The Obama administration should work to ensure that they do not.