May 09, 2016
DONETSK, Ukraine -- Russia sends another batch of tanks, artillery systems and personnel into Donbass. 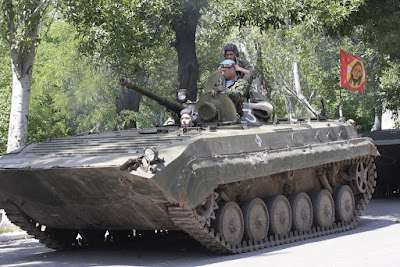 Ukrainian intelligence service reports another train convoy with Russin fighters and military hardware arriving to the militant-occupied city of Khartsyzk in Donetsk region.

In a statement, the Main Directorate of Intelligence of Ukraine's Defence Ministry said, "Fuel materials are being continuously delivered into the militant-occupied territory from Russia. The arrival of a train convoy has been spotted in the city of Khartsyzk with three tanks, eight armoured personnel carriers, two 122mm-calibre Grad multiple rocket launchers, six military trucks, and almost 100 people. After unloading, the equipment and the fighters have been transported to Donetsk."

The statement also says the Ukrainian side has submitted reports to the representatives of the OSCE Special Monitoring Mission in Ukraine about the presence of tanks, and 100mm- and 122mm- calibre artillery systems near Lozove, Horlivka, Molodizhne and Donetsk.