EU Realpolitik On Ukraine - Too Little, Too Late

April 07, 2016
BRUSSELS, Belgium -- On 3 March, European Commission president Jean-Claude Juncker announced that Ukraine would not join the EU for at least 20 years. 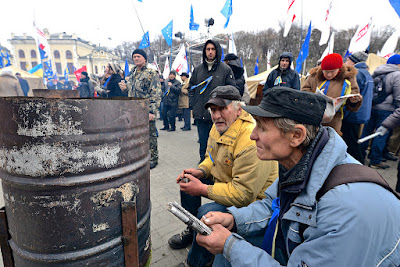 At the same time, the foreign ministers of France and Germany demanded that Kiev clear the way for local elections in separatist-occupied eastern Ukraine, which would most likely lock in the military successes of pro-Moscow fighters.

This European realpolitik should surprise nobody: over Syria, there is a dangerous military stand-off between Russia and Turkey.

Turkey is a NATO member and vital for the EU to decrease the flow of refugees into an increasingly unwelcoming and strained EU.

Ukraine, on the other hand, is in a deep political and economic crisis.

European leaders now have an all too transparent interest in curbing Ukrainian hopes for EU membership and soothing Russia’s strategic paranoia.

Realpolitik has, rightfully, a bad reputation - especially for the EU, which is praised by politicians for its Nobel Peace Price and lauded by political scientists as a “normative power”.

But if Europe had adopted realpolitik earlier, Ukraine would have suffered less.

Talk is not cheap

Talk is not cheap in international politics.

But those who talk often reap the benefits, while others pay the price.

In the past, European leaders have left all possibilities open for themselves.

They endorsed Ukrainian aspirations for EU integration - without ever clearly stating what Ukraine could realistically hope for.

This was convenient: If Ukraine would turn out to be able to master its massive problems - political polarisation, corruption and poverty - the EU could simply reach out and add another item to its “normative power” list.

But if Ukraine would fail, the EU could easily retract.

Talk was cheap for the EU, but not for Ukraine.

For over two decades, big parts of Ukraine’s civil society and, more importantly, a strategic majority of its political elite had confidently set their bets on this European promise.

Contrary to vulgar and populist views of “EU imperialism”, it was Kiev and not Brussels that has pushed for more integration.

This was the case even when supposedly “pro-Russian” presidents were in charge of the country:

And only under the notorious Viktor Yanukovych, who had received personal endorsements by Russian leader Vladimir Putin, did negotiations over a serious association agreement with the EU begin in earnest.

Kiev saw a real chance for a full accession of Ukraine to the EU - but so did Moscow.

The siloviki, the old military and espionage cadres around Putin, had long noticed that Ukraine, while pushing for Europe, kept resisting integration into a Russia-dominated Eurasia.

Kuchma rejected the Collective Security Organisation, which was created by Russia to balance NATO.

And Yanukovych kept Ukraine out of the Eurasian Union, which Putin had built with rapid speed after EU-Ukrainian negotiations on an association agreement had begun in 2008.

Russia said openly that it saw both NATO and the EU as threats encroaching on its borders.

The more Ukraine moved EU-wards, the more Russia lashed out.

In other words: the leaders of the EU and its member states have had plenty of chances to realise how differently Moscow and Kiev viewed the question of Ukraine inching towards the EU - and how serious this issue was.

What followed was the conclusion of the sad story of how the EU’s vague and idealist rhetoric, coupled with a lack of real political interest, played its part in bringing about Ukrainian suffering.

In 2013, Yanukovych gave in to Russian pressure and refused to sign the association agreement.

Ukrainian protesters felt betrayed by their ruling class and started to face off against heavily armed policemen on Kiev's Maidan square.

All the while, the Europeans insisted, in highly moral tones, that they would not negotiate with Russia over Ukraine’s future.

Fast forward to March 2016: After the past two years, Ukraine and Russia are in a state of undeclared war, 9,200 people have died, over one million Ukrainians have lost their homes, Russia has annexed Crimea and the Ukrainian economy is shrinking by 10 percent a year.

Hundreds of protesters were also killed or went missing on the Maidan.

Contrary to earlier pronouncements, the EU did indeed negotiate with Russia over Ukraine’s future.

It included Russia in the talks over the economic part of the association agreement and, on Moscow’s demands, delayed its implementation for over a year.

It seems that EU leaders explicitly told Kiev they would not support any military resistance of Russia’s annexation of Crimea.

The EU and its major member states also accepted all the key Russian demands in the Minsk agreements while urging Ukraine to accept them as well.

This straight-talking realpolitik is one of the less bad options that the EU can currently take.

As morally reprehensible as it might be, it accommodates Russia’s paranoia and gives Ukraine a clear picture of what its real options are.

If the EU had taken this approach earlier, Ukraine would clearly be in better shape now.

Ukraine’s perils are, of course, not solely or even primarily the EU’s fault, but Europeans do not have any reason to pat themselves on the back.