March 08, 2016
DONETSK REGION, Ukraine -- Two years into Ukraine’s war, many of the people caught in the midst of it see the conflict as frozen and forgotten by the rest of the world. 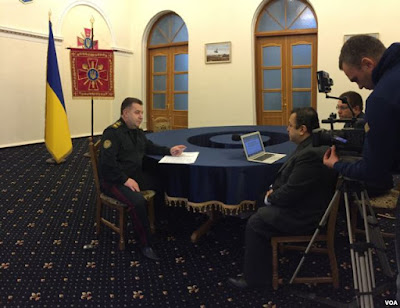 With diplomatic efforts thus far failing, many see either an escalation or the relinquishing of territory as the only alternatives to ending the war.

When Olga Aleshychkina’s home in the Donetsk region town of Horlivka was shelled in 2014 and her business destroyed, her family had to try to start over.

They traveled down the road to Kramatorsk - a town that back then was just on the edge of the Ukrainian-controlled area - found an apartment, and opened a restaurant.

“Of course, I understand that we can’t bring back what we had before, this is for sure, but at least let’s not to make it worse for anyone," she said.

Aleshychkina especially tried to protect her children and make them feel as secure as possible.

Then, the shells started landing in Kramatorsk, too.

“I was terrified that there and here, the same hell was happening,” she told VOA.

“You think that in this place there is peace and then the same process begins here.”

Two years into the conflict, Aleshychkina says her family is just surviving and the only thing she wants is for the war to end.

She considers herself lucky that she found an apartment and did not have to go to a shelter for displaced people, as thousands of others have had to do.

These days, families continue to flee their homes, but unlike at the start of the war, it is more often economic conditions that are now driving many from the war zone.

With many coal mines closed or flooded, jobs have largely disappeared.

The coal mining jobs that are left are often in dangerous, illegal mines.

For some, leaving is the only alternative to joining separatist groups, says Olexander Petrov, a volunteer who regularly enters combat areas to evacuate civilians.

The conflict is stuck, and so are people’s lives.

“We do not need a frozen conflict in Ukraine,” Petrov told VOA.

“It is not possible to just stall this war. We can only either win it or lose it,” he said, and he hopes government soldiers “will finally get the orders” to defeat the separatists.

Ukrainian leaders are bracing for a major new offensive that may begin at any time, and both sides are sending supplies, equipment and personnel to the front.

VOA observed a convoy of 25 Ukrainian military trucks on Sunday heading into what the government designated the “Anti-Terrorist Operation” area of the Donetsk region.

Ukraine says it is more prepared than it has ever been following two years of anti-corruption reforms and development of forces, thanks in part to U.S. assistance that has included training and non-lethal equipment such as medical supplies and mobile hospitals.

“In the beginning of this conflict, we had a terrible situation in our military,” Ukraine’s Defense Minister Stepan Poltorak told VOA in an interview last week.

He noted that since last year, Ukraine has doubled its military budget and manpower.

“I can reassure you that if (Russian President Vladimir) Putin decides to attack, this is not going to be an easy trip for him or for his soldiers.”

Despite the doubling of manpower, Ukrainian soldiers are seeing their deployments extended.

One soldier riding a train from Kiev to the front line told VOA he has seen improvements in supplies, training and equipment, but at a lesser scale than the doubling of the budget and resources might suggest.

“We have enough food, uniforms, equipment, night-vision goggles, guns. Volunteers help a lot. What they bring is always better. What the government gives is good, but not as good as what the volunteers bring,” he said, requesting anonymity.

But the quantity or quality of supplies is not for him, personally, the biggest source of frustration.

He believes Ukraine’s leaders have forsaken the country’s best interests by not fighting the war more aggressively.

“We are waiting for the order. We could clean the territory out very fast. We could take them (the separatists) out,” he said.

“This is kind of a sell-out war. Our government, they kind of betrayed the actions of soldiers who are doing a great job and are losing their lives because of the actions of the government. It is for nothing.”

Ukrainian leaders share some of the frustration, especially when it comes to their longstanding request to the United States for lethal equipment, including anti-tank weapons and air defense systems.

The Obama administration continues to reject those calls.

Analysts say Washington believes that arming Ukraine more robustly could provoke an overt confrontation with Russia in a place where the U.S. leadership sees no deep strategic interests.

Two years after the start of the conflict, Ukrainians living in the war zone perceive they are alone in the fight.

In the beginning of the Maidan revolution that led to the war, “we perceived the U.S. a protector,” a woman in her 20s who participated in the 2014 protests, told VOA - asking not to be named.

“The U.S. said ‘we are on your side’ and U.S. officials gave out cookies to demonstrators during Maidan,” she said.

“This all created the image in our minds that we could get more.”

Now, she said, Ukrainians like to joke with each other by saying “we’re very concerned” when they really mean they don’t care that much about something.

Lyudmila, a businesswoman in Kramatorsk, which has changed hands twice in the conflict, told VOA she believes it is time to stop the war, even if that means giving up land to the separatists.

“Just let them go. Not that I want to let them go, but we should not waste time,” she told VOA.

“I do not want to wait for the miracle to come.”

That view is not shared by all.

Olga Aleshychkina expresses no opinion on how the war should end, but she knows she wants it to end soon and she says she prays for a miracle.

“There is anxiety, but still we are trying to fight,” she said on a chilly morning Sunday as she took her young son to football practice in a gymnasium near the apartment where she now lives.

Aleshychkina likes to think better times are ahead.

“Looking at our new generation, my soul is happy and singing, thinking that everything will be all right. This is all that I want.”