March 10, 2016
KIEV, Ukraine -- In early March 2014, veteran Russian ultranationalist Anton Rayevsky stood near a demonstration in St. Petersburg against Moscow's forceful annexation of Ukraine's Crimean Peninsula that was under way at the time. 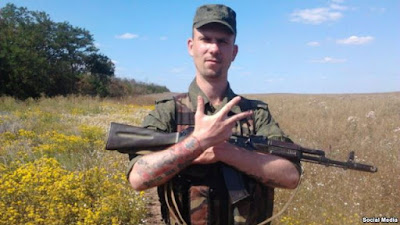 Anton Rayevsky, who says he now regrets that he took up arms in the war, disputes the Kremlin's version of the status of Russian combatants in the conflict.

He held a placard that read: " Russians support sending Russian troops to Ukraine."

"I will fight. I'm not scared," the self-described former "fascist," who has a partially erased Adolf Hitler tattoo on his left arm, told a journalist who asked him about his one-man protest.

In the months that followed, Rayevsky made good on this vow.

He and a group of fellow nationalists joined Russia-backed separatists to fight Kiev's forces in a war that has since killed more than 9,200 people in eastern Ukraine.

And while says he never saw the regular Russian troops he had called for during his picket in St. Petersburg, it was crystal-clear to Rayevsky that the Russian military was orchestrating the separatist forces -- and arming them.

"I can say with absolute certainty that all of the mid- and high-level commanders -- from the battalion to the brigades -- were Russian advisers. All of the military equipment we had, all of the weapons: It was all from Russia,"

Rayevsky's specific claims about his time fighting with separatists in eastern Ukraine could not be independently verified.

But they are consistent with a broad array of evidence of the Russian military's direct involvement in the conflict.

Kiev, the United States, the European Union, and NATO have accused the Kremlin of providing weapons, personnel, training, and cash to the separatists since the war erupted in eastern Ukraine in April 2014.

Moscow has repeatedly rejected the allegations, often claiming that only Russian "volunteers" -- among them Russian soldiers purportedly on leave – have fought against the Ukrainian military.

In December, President Vladimir Putin suggested that there were Russian military personnel carrying out orders in Ukraine -- but still insisted there were no "regular Russian troops" there.

The Kremlin later walked back his remarks, saying Putin was referring to volunteers.

Evidence against Putin's claim includes accounts by soldiers to media, funerals for Russian servicemen in their hometowns, and indications of involvement by regular Russian troops at key points in the conflict such as the summer of 2014 and the fighting for Debaltseve early in 2015.

Rayevsky, who says he now regrets that he took up arms in the war, disputes the Kremlin's version of the status of Russian combatants in the conflict.

"Active Russian [military] advisers, trainers, Russian military equipment -- all of that is there," he says.

"With regards to actual soldiers, I didn't see them. I think they are limited groups that are deployed in [the southern Russian city of] Rostov-on-Don and ready to move to any hot spot when called upon."

Rayevsky says he was recruited to fight in Ukraine by a group that claims the mantle of the Russian All-Military Union, an anti-Bolshevik White Army emigre organization founded in 1924.

On June 23, 2014, he says, he and his unit of about 10 fighters arrived in the city of Slovyansk, then held by the separatists but recaptured the following month by Kiev's forces.

It was there, Rayevsky says, that he met separatist commander Igor Girkin, also known as Strelkov, a Russian who said last year that he was a colonel in Russia's Federal Security Service (FSB).

"Streklov-Girkin shook each of our hands, thanked us for being Russian volunteers who came to fight....They gave us weapons, loaded us into a car, and shipped us to the front," he says.

Rayevsky says he ultimately went on to command a motorized-rifle platoon, holding the rank of lieutenant with the forces of the separatists who hold part of eastern Ukraine's Luhansk region.

Throughout his six-month stint with the separatists, he says, he repeatedly encountered Russian military officers.

He says that in the town of Debaltseve, which was also recaptured by Ukraine in July 2014 but changed hands again in February 2015, when the separatists continued a major offensive despite a new cease-fire deal, he met with a battalion commander nicknamed "Machete."

The battalion commanders in the separatist forces in both the Luhansk and Donetsk regions were "active Russian military officers," he adds.

"Russian advisers are the direct commanders on the ground and create the military rhythm of the whole machine," Rayevsky says.

He adds that he had already returned to Russia by the time separatists launched the major offensive to retake Debaltseve in early 2015, a push that Washington said was carried out by "separatist forces acting in concert with Russian forces."

"Maybe in local conflicts [separatists] participate directly and give orders, but in general the battalions are tracked, controlled, and given orders by Russian military advisers, who in turn get their orders, of course, from Moscow," Rayevsky says.

'On The Kremlin's Payroll'

While fighting has eased substantially since September, each side accuses the other of frequent cease-fire violations.

This has dimmed prospects for the full implementation of the Minsk II peace accord signed in February 2015, which calls for the withdrawal of foreign fighters and the restoration of Ukrainian control over the border that Kiev says Russian forces have streamed across during the conflict.

Anton Rayevsky's separatist card Rayevsky places the lion's share of the blame on Russia for "unleashing this war" but says "some politicians and security services in Ukraine are complicit as well in heating this war up."

"The war should definitely be ended, and no more blood of the people of Donbass should be spilled," he says, referring to the region of eastern Ukraine where the bulk of the fighting has taken place.

He says he hopes that by speaking out he can "warn others so that they don't buy into this bacchanalia, this propaganda."

"I'm warning others now not to participate," he says.

"That's the first thing. Second, I am divulging the role of these rah-rah patriotic organizations that are on the Kremlin's payroll so that people don't buy into their propaganda."

Rayevsky says he was aghast at the rampant alcohol abuse and perilous lack of discipline in the separatist ranks.

"This was an epidemic of drunkenness not only on the base, but on the battlefield and the front lines, when the regular Ukrainian Army on the front line was a kilometer away from us," he says.

He says that after fighting for six months, he decided to leave as quickly as possible after "some officers in our battalion accused me of supposedly shooting at our own positions."

Before he fought alongside the separatists, Rayevsky was kicked out of Ukraine for participating in an antigovernment rally in Odesa -- where anti-Kiev activists widely believed to have been supported by Moscow held demonstrations but never seized territory like those in Donbass.

Rayevsky says his decision to speak publicly about his stint fighting with the separatists is also driven in part because investigators in his hometown of Oryol, 360 kilometers southwest of Moscow, recently designated him as a witness in a case linked to incitement of hatred.

He fears he could become a suspect in the case and believes that speaking out about his experience in eastern Ukraine, where he was wounded in battle, could help him avoid prosecution or prison.

Rayevsky says he has disavowed his earlier neo-Nazi ideology, and now considers himself a "Russian Orthodox monarchist."

Asked, however, if he still believes minorities -- including Jews -- are the main enemies of Russia, he replies, "If [I am] to be honest, then yes."

The Hitler tattoo has been remade into that of a Roman warrior, he says, but he doesn't get offended "if they call me a fascist."

Rayevsky says his Nazi-themed skin art prompted suspicion and confusion among locals, including separatists, during his time in eastern Ukraine.

Russia, after all, has persistently portrayed the ouster of former President Viktor Yanukovych as a coup carried out by a fascist junta.

"You start to explain that you're a Russian nationalist who came here to fight for Novorossia, for Russian people," Rayevsky says, using a tsarist-era term that was embraced by Putin in 2014 and refers to most of eastern and southern Ukraine.

"They say: 'What Russians? We're Ukrainians. What Novorossia? We want to live autonomously from both Russia and Ukraine.'"