February 25, 2016
BRUSSELS, Belgium -- A newly-published transcript of Ukrainian crisis talks two years ago indicates that EU powers and the US urged Kiev not to resist Russia’s invasion of Crimea. 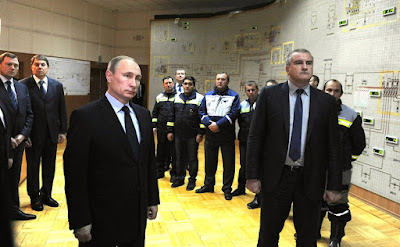 The document, published by a Ukrainian parliament committee on Tuesday (23 February) contains the official minutes of Ukraine's National Security and Defence Council on 28 February 2014.

The meeting, chaired by then acting president Oleksandr Turchynov, was called one week after former president Viktor Yanukovych fell from power and one day after Russian special forces seized government buildings in Crimea.

Turchynov wanted to declare a state of war and fight back.

But ministers and others warned him that Ukraine couldn’t do it alone and that the West wouldn’t help.

“We’re not ready for full-scale war. We need time. We need help. We need a tough reaction by the world, the international community. I’ll speak frankly. Today we have no army. It was systematically destroyed by Yanukovych and his entourage,” the defence minister, Ihor Tenyukh, said.

He said Ukraine could mobilise up to 5,000 troops.

But he said Russia was holding military drills on Ukraine’s eastern border which involved 38,000 troops with armoured, air, and naval support.

“It’s not just a demonstration of power, but a real preparation for the invasion of our territory,” Tenyukh said.

Other ministers told Turchynov not to expect popular resistance because the “dominant” mood of people in Crimea was on the Russian side.

They blamed Russian propaganda, which had broadcast fake stories that Kiev “fascists” were coming to massacre Russian-speakers.

They also linked it to years-long “subversion” operations in Crimea by Russian intelligence.

Arseniy Yatsenyuk, the then PM, who had taken office just one day earlier, told Turchynov that the country had no money for a war because Yanukovych had stolen it.

“We have a treasury account with no money in it at all,” he said.

Yulia Tymoshenko, a former prime minister who had just been freed from jail and who attended the meeting in an informal capacity, said that if Ukraine began moving its army toward Crimea it would cause “panic.”

“Can you imagine what will happen in the country when tanks and armoured vehicles roll through the streets? This will cause mass panic. People will massively flee the country,” she said.

Yatsenyuk went on to say it’s “a pity” that the US Sixth Fleet pulled back two warships which had been stationed in the Black Sea, in a sign of Western intentions.

Asked by Turchynov if NATO is “afraid” to help Ukraine, the PM replied: “In today's environment, clearly.”

“I don’t think that any country, including those of the Budapest Memorandum, will be willing to help Ukraine,” Yatsenyuk said, referring to a 1994 treaty in which France, the UK, and the US had promised to protect Ukraine in return for its dismantling of its nuclear arsenal."

He said "Western states want to avoid “a military conflict with Russia in the middle of Europe ... we have to cope on our own.”

He added that if Ukraine declared a state of emergency or state of war, then Russia would take it as meaning that it’s “declaring war on Russia.”

“Right after we do this, there will be a Russian statement on ‘defending Russian citizens and Russian speakers who have ethnic ties with Russia.’

That’s the script the Russians have written,” he said.

Tymoshenko added that the Crimea scenario resembled Georgia in 2008.

The 2008 war began when Russia-controlled fighters in the breakaway South Ossetia region in Georgia escalated skirmishes against Georgian troops.

When the then Georgian leader, Mikheil Saakashvili, fired back on the South Ossetian capital, Tskhinvali, Russia invaded Georgia proper.

Saakashvili thought that the US or NATO would help him.

But no one did.

“He [Russian leader Vladimir Putin] is just waiting for us to give him a reason. Remember how Saakashvili swallowed his bait and lost?”, Tymoshenko said.

“The Americans and Germans - all of them in one voice - are asking us not to start any action because, according to their intelligence, Putin will use it to start a large-scale land invasion,” he said.

The meeting bandied round ideas such as calling for UN Security Council talks, asking the West for financial aid, and urging Ukrainian expats to picket Russian embassies around the world.

At one point, Tymoshenko said: “We have to become the most peaceful nation on the planet, to behave like doves of peace.”

Turchynov said: “Are you really suggesting we do nothing?”

The conflict has so far claimed at least 9,200 lives and displaced more than 1 million people.

But Ukraine still hasn’t declared a state of war with Russia and Western powers still haven’t given it military assistance.

The EU and US did impose economic sanctions on Russia.

But with the West angling for Russian cooperation on Syria and on the refugee crisis, these could end in July.

The EU and US say they won’t recognise Russia’s annexation of Crimea and that sanctions on doing business there will stay in place for the long term.

But even Ukrainian diplomats don’t think they’ll get Crimea back unless Russia changes, as in the 1990s, when the collapse of the Soviet Union undid former conquests.