Railing Against Graft, A Georgian Leads Calls For A Cleanup In Ukraine

February 04, 2016
KHARKIV, Ukraine -- It was supposed to be a routine cabinet meeting for Ukraine’s Western-backed government. 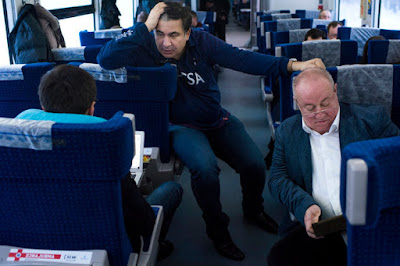 Mikheil Saakashvili, the former president of Georgia, center, speaking with Ukrainian lawmakers on a train in January.

The interior minister, Arsen B. Avakov, a banker and businessman, was reading a prepared speech about privatizing state assets.

Finally, Mikheil Saakashvili, the former president of Georgia, who was appointed governor of the Odessa region last summer and has taken on the role of chief corruption fighter here, had heard enough, breaking in and flatly accusing the minister of wrongdoing. “Blah, blah, blah,” Avakov responded.

“Nobody ever talked to me that way.”

Ministers and their aides looked awkwardly down at their feet or twirled pens.

Avakov returned to his speech, but Saakashvili stopped him again, shouting, “I will prove that you are a thief!”

With that, Avakov hurled a glass of water at Saakachvili.

“You are a bastard and a circus artist,” he yelled.

“Get the hell out of my country!”

Saakashvili, 48, stared down Avakov for a few moments, then spat out the word “thief” and strode out of the room.

While the water ended up on the Ukrainian foreign minister, Pavlo Klimkin, not on Saakashvili, the confrontation that many later compared to an elementary-school fight succeeded in bringing to light a dangerous fault line in Ukraine’s leadership, one that threatens the West’s $40 billion effort to build the country into a bulwark against President Vladimir V. Putin’s Russia.

President Petro O. Poroshenko’s appointment of Saakashvili and a number of foreign technocrats created tension between anticorruption forces and those who want to respect a tacit agreement made with the country’s business elite in exchange for their support against pro-Russian forces.

The tension surfaced again on Tuesday when Ukraine’s economic minister resigned to protest pressure on his ministry from an oligarchic businessman with ties to Poroshenko.

The minister, Aivaras Abromavicius, a Lithuanian and one of the foreign technocrats appointed to root out corruption, said that a businessman, Ihor Kononenko, had lobbied to have his loyalists appointed managers of a government-owned ammonia fertilizer company to skim off the profits.

“I don’t want to be a smoke screen for obvious corruption or a marionette for those who want to return control in the old style,” he said.

The United States ambassador, Geoffrey R. Pyatt, posted on Twitter in support of the aggrieved minister, calling him one of the country’s “great champions of reform,” as the gap widened between Ukraine’s oligarchs and a Western-backed, reformist wing of the government.

Standing astride that chasm is Saakashvili, one of the post-Soviet era’s most contentious and best-known politicians in the region, a graduate of Columbia Law School who came to power in his native Georgia after the bloodless Rose Revolution in 2003.

So impressed were Western politicians that Saakashvili once joked that when he walked through Congress he turned more heads than Britney Spears.

At home in Georgia, though, he was a lightning rod for debate, steering a pro-Western course that culminated in a disastrous war with Russia and an electoral defeat.

After a self-imposed exile in Brooklyn, he is now reinventing himself in Ukraine.

Anger over corruption was one of the major issues that animated the protests in Independence Square in Kiev, known as Maidan, leading to the demise of the pro-Russian government in Ukraine.

But two years and many proclamations later, the country’s ranking in a standard gauge of government malfeasance, Transparency International’s corruption perception index, has barely budged: Ukraine has moved to No. 130 in 2015, from No. 144 in 2013, in the list.

That is little surprise to most Ukrainians, since the new government of Poroshenko is padded with people drawn from the same corrupt business circles as the old government.

And now it has fallen to the unlikely person of Saakashvili, an outsider in Ukraine, to try to break the economic stranglehold of those ultrarich insiders.

“I’m close to them, but I wasn’t part of them,” Saakashvili said in an interview here last month.

“People tend to trust outsiders more than the decades-old insiders.”

In addition to Saakashvili, the president has appointed Natalie Jaresko, an American-born financial expert, as his finance minister, and Maria Gaidar, a Russian advocate of overhauls, as Saakashvili’s deputy after he was appointed head of Odessa by Poroshenko.

“But we had the revolution that basically didn’t produce real change. Now is the time to resolve this.”

Saakashvili said he saw his role as unwinding a central compromise of the postrevolution government.

That deal, attributed to a former prime minister, Yulia V. Tymoshenko, offered the oligarchs a chance to retain their wealth and influence in return for loyalty in the fight against Russia.

In exchange for appointments as governors, the oligarchs agreed to deploy their wealth to finance private militias to fight the separatists.

Igor V. Kolomoisky, a gas station and airline tycoon, was appointed governor of the Dnipropetrovsk region, where he founded Ukraine’s most powerful private militia, the Dnipro-1 battalion.

Kolomoisky is now out of office, and Poroshenko has taken steps to incorporate Dnipro-1 and other private militias into the army.

But with the war now seemingly winding down, Saakashvili argues, it is also time to strip the oligarchs of their ability to pull revenue out of Ukrainian state companies, lest the public lose faith in the new government.

It is time, Saakashvili said, to renege on the deal.

“The problem is, they had this agreement with the old elite,” Saakashvili said, not with ordinary Ukrainians.

Rather than renationalize assets, as Putin did to sideline Russia’s oligarchs a decade or so ago,  Saakashvili suggested that Ukraine could elbow the ultrarich from politics by cleaning up state-owned enterprises.

“You can just cleanse them of their oligarch manager and basically destroy or abolish this joint stock company of oligarchs that is what they see, what they regard, as Ukraine,” he said.

Saakashvili has faced some resistance to his plans, and not just from the oligarchs.

Arseniy P. Yatsenyuk, the prime minister who speaks fluent English and portrays himself as a Westernizer, has insisted that the government stand by its agreement with those who backed the fight against Russian separatism, including the interior minister, Avakov.

Saakashvili, a shrewd politician with a populist streak, has set about organizing rallies around Ukraine to build a grass-roots anti-oligarch movement called Cleaning Up Ukraine.

And he started the movement, pointedly, here in Avakov’s hometown, Kharkiv, in January.

“What I hear from Ukrainians, unfortunately, is it’s never been this bad in Ukraine,” Saakashvili told the crowd in Kharkiv.

Saakashvili spoke of post-Soviet malaise, of kleptocrats and party hacks who steal the people’s money and hope.

The crowd soon warmed to his heavily accented Russian.

Given the anger at corruption, it seemed to work.

The oligarchs who feed the rotten politics of Ukraine, even now, he said, must go.

Afterward, Saakashvili waded into the crowd.

The poor and elderly in frayed sweaters and cheap overcoats pressed in, asking him to lead them out of the mess.

Women sidled up to snap pictures.

In the swirl, Saakashvili smiled and soaked up the attention. “He’s our last chance!” somebody yelled.