January 18, 2016
KALININGRAD, Russia -- Assistant U.S. Secretary of State Victoria Nuland and Kremlin aide Vladislav Surkov met behind closed doors in Russia's western exclave of Kaliningrad on January 15, the latest talks in a flurry of recent diplomacy to broker an end to the bloody 20-month-old war in Ukraine's east. 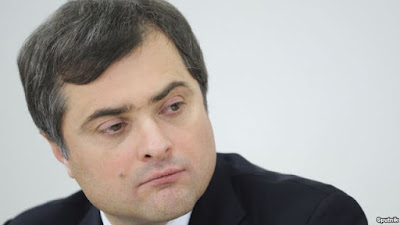 The meeting, held at a state residence outside Kaliningrad, focused on "the situation in eastern Ukraine and the need for full implementation of the Minsk agreements," State Department spokesman John Kirby told reporters in Washington, referring to measures signed in February to resolve the war between Kiev's forces and Russia-backed separatists in eastern Ukraine.

In a statement earlier in the day, Kirby said the meeting was part of "our continued efforts to work with Russia to ensure full implementation of the Minsk agreements, in close coordination with the other Normandy powers -- Ukraine, Germany, and France."

Kiev and the West accuse Russia of supplying weapons, personnel, and money to separatists that have fought Ukrainian forces in the conflict, which has killed more than 9,100 people since April 2014.

Russia rejects the accusation despite significant evidence of such support.

The United States and the EU have both imposed sanctions on Russian officials, businesspeople, and companies in response to the Kremlin's interference in Ukraine, including its annexation of Ukraine's Crimea peninsula in March 2014.

The AFP news agency cited an unidentified source familiar with the matter as saying that the meeting was held on Russian territory because Surkov, widely credited as the mastermind behind Russian President Vladimir Putin's consolidation of political power at home, is among the Russian officials hit with Ukraine-related sanctions.

Surkov was quoted by Russia's state-owned RIA Novosti news agency as saying that his talks with Nuland were "constructive and useful."

"It was a kind of brainstorm session in search of compromises for the fulfillment of the Minsk agreements," he told reporters.

The bilateral meeting follows a fresh bid by negotiators this week to enforce a shaky cease-fire in eastern Ukraine.

Martin Sajdik, the envoy for the Organization for Security and Cooperation in Europe (OSCE), said following a January 13 meeting of the Trilateral Contact Group, which is brokering a settlement to the conflict, that negotiators had agreed to make a renewed effort to maintain the truce.

U.S. President Barack Obama also discussed Ukraine with Putin in a telephone call this week, and Secretary of State John Kerry is set to meet his Russian counterpart, Sergei Lavrov, in Switzerland for talks on the Ukrainian and Syrian conflicts on January 20.