January 21, 2016
WASHINGTON, DC -- Though scarcely reported in the US media, all leaders involves in the epicenter of the new Cold War have launched a concerted campaign to end the Ukrainian civil (and US-Russian proxy) war. 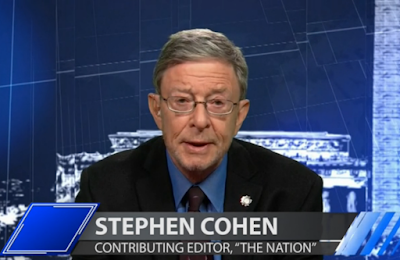 Cohen begins by recounting diplomatic activity by Washington, Paris, Germany, Moscow and Kiev since early January, which has gone largely unreported in the American media but which may be the last, best chance to end the Ukrainian crisis.

Russian President Putin appointed two of his most trusted and experienced associates as his personal representatives to Kiev and to the anti-Kiev rebels in Donbass.

A few days later, on January 13, President Obama placed a call to Putin, the man he had vowed to “isolate” in international affairs, with Ukraine a priority of their discussion.

At issue were two essential elements of the Minsk Accords, drafted by Merkel and Hollande and ratified by Putin and Poroshenko but resisted for many months by Poroshenko: constitutional legislation in Kiev granting the rebel regions a significant degree of home rule and recognizing the legitimacy of forthcoming elections in those regions.

All sides reported significant progress, though Poroshenko said he lacked sufficient votes in the Ukrainian Parliament, a tacit admission that he fears a possibly violent backlash by ultra-nationalist forces.

Cohen thinks that dire problems at home have compelled all of the these leaders to undertake the intense negotiations, problems ranging from Europe and Syria to Russia’ s economic woes, as well as their own political standing at home.

In this context, Cohen emphasizes that the US media-political narrative is wrong about what Putin wants in Ukraine: not a permanently destabilized country but a peaceful neighbor that does not threaten Russia’s vital economic or security interests—or permanently divided many millions of Russia-Ukrainian families.

Cohen concludes, while also emphasizing the many obstacles­—particularly, powerful opposition to the negotiations in Washington and NATO—that this is a turning point, a fork in the road, which tests the leadership qualities of all the leaders involved and will shape their historical reputations—first and foremost those of Presidents Obama and Putin.