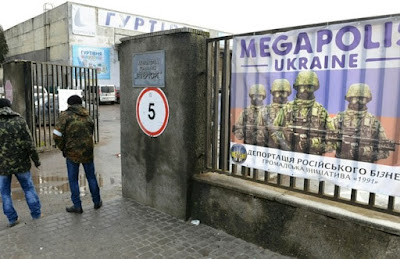 Activists stand next to the entrance of a Russian cigarette distribution company on January 12, 2015 in Lviv, western Ukraine, in an attempt to prevent employees to get in their office.

Lawmaker Sergiy Vystotskiy said the protest was launched in Kiev and the Western city of Lviv and other locations around the warehouses of a firm controlled by Moscow-based retail magnet Igor Kasaev.

Forbes magazine identifies Kasaev as president of the Mercury group of companies that controls 70 percent of the Russian cigarette market and more than 90 percent of those in Kazakhstan and Ukraine.

Vystotskiy wrote on Facebook that Kasaev had secretly split the Ukrainian branch of his company “50:50 with Yanukovych’s family” – an expression used by the ousted leader’s critics to describe insiders who allegedly profited from preferential deals.

A Kiev police spokesman confirmed that “activists” had launched a protest action in the Ukrainian capital Tuesday around a warehouse owned by Mercury.

He provided no other details and directed all questions to the organizers of the protests aimed at getting the government to break up the Russian-linked firm.

Photographs in Ukrainian media showed at least 200 protesters gathered in the heavily pro-Western and nationalist city of Lviv alone.

Economic relations between Russia and Ukraine have been effectively frozen since the moment Kiev entered a free trade agreement with the European Union at the start of the year.