January 13, 2016
ISTANBUL, Turkey -- “It is no secret that our countries are turning a new page in their relationship. This relationship also includes a focus on trade and investment.” 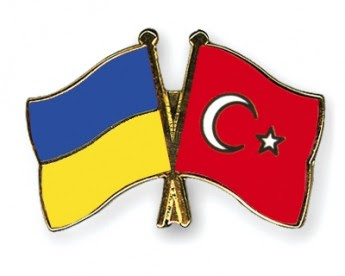 These were the words of Ukraine’s Deputy Minister of Economic Development, Nataliya Mikolskaya, who met with a Turkish delegation on the sidelines of the World Trade Organization meetings in Nairobi to discuss possibilities of closer cooperation between the two countries.

There is indeed no secret about Turkey and Ukraine embracing each other as good friends.

While the stand-off they both have against Russia is a factor that binds them, it is not only the common threat perception they are facing, but also — and perhaps more importantly — the deterioration of their economic linkages with Russia which is drawing these two littoral states of the Black Sea closer together.

Turkey and Ukraine have always had cordial relations since the emergence of the latter as an independent country after the dissolution of the Soviet Union, with significant commercial and people-to-people exchanges between them over the past two decades.

Russia’s annexation of Crimea in 2014 complicated the relations between Turkey and Ukraine to some extent as Ankara had to maintain a fine balance between Russia, on which it was economically dependent on one hand, and Ukraine, a trading partner and home to a sizeable ethnic Turkic minority, the Crimean Tatars, on the other.

During the crisis between Russia and Ukraine, Turkey adopted a cautious approach to the problem.

Ankara declared that it is not going to recognize the annexation of Crimea, supported Ukraine’s territorial integrity, offered Ukraine a $50 million loan and called for the protection of Crimean Tatars.

At the same time, it also refrained from an outright criticism of Moscow’s actions.

Ukraine was important for the Turkish government, but probably not enough to alienate Russia, which provides 60% of gas Turkey is consuming.

The stand-off between Ankara and Moscow, which has escalated rapidly after the downing of a Russian jet by Turkish planes, has changed this equation.

Turkey and Ukraine are not only finding themselves on the same boat in the sense they are both perceived as enemies by Russia, but they are also facing the obligation of calibrating their regional economic relations by creating alternatives to lost Russian business.

Turkey’s prime minister Ahmet Davutoğlu has recently reminded an audience that “Turkey has never recognized the annexation of Crimea and will never do so” adding that he will visit Ukraine in the earliest instance after which Ukraine’s president Petro Poroshenko will pay a visit to Turkey.

In the meantime, Turkey’s president Recep Tayyip Erdoğan has publicly posed a rather rhetorical question to the Russian government asking “why and upon whose invitation they have entered Ukraine”, a question clearly in defiance of Moscow’s claims of having intervened in Syria upon the request of the Syrian regime.

Increasing diplomatic exchange and political communication between Turkey and Ukraine in the coming months would be a natural development to expect.

A more visible development at the bilateral level, however, is already being experienced in the economic realm.

As of January 1, 2016, Russian sanctions against both Turkey and Ukraine have taken effect.

Accordingly, there is a ban on Turkish agricultural products and other foodstuff, charter flights are banned as well, visa-free travel regime between Turkey and Russia is suspended, and Turkish companies are prohibited from taking part in public procurement tenders in Russia.

At the same time, Russia has also begun regulating transit of goods from Ukraine to Kazakhstan passing through Russian territory.

Under these circumstances, Turkey and Ukraine see much benefit in expanding their economic cooperation and creating new opportunities for trade and investment to minimize losses incurred from Russian sanctions.

As a first step, negotiations for a Turkish-Ukrainian free trade agreement are being speeded up through intensive efforts of both government’s economic bureaucracies and business communities.

Turkey’s trade with Ukraine was already on a rising trend before the stand-off with Russia, with the bilateral trade volume having gone up from $125 million in 1992 to a massive $5 billion in 2014, and a free trade agreement will likely take these figure to a much higher levels.

In addition to liberalizing trade, Turks and Ukrainians are also expressing their interest in exploring joint investment opportunities in agriculture, aircraft construction and information technologies.

In addition to these targeted sectors, a recent announcement by Ukroboronprom, Ukraine’s defense industry concern, that Turkey is a possible partner for its modernization project of armored vehicles shows that economic cooperation between the two countries can expand to strategic industries.

At a time when Russia is placing limitation on flights to/from these two countries it considers enemies, business people and travellers in general are enjoying more alternatives for shuttling between Turkey and Ukraine.

As of December 28, Turkish Airlines included Zaporozhe to its list of Ukrainian destinations, which already included Kiev, Odessa, Lviv, Kherson and Dnepropetrovsk.

It has to be noted that while as of January 1, 2016, Turkish passport holders have been re-subjected to visa requirement for entry into Russia, Turks and Ukrainians can visit each other countries without the need for obtaining a visa.

Having its access to Central Asia constrained by newly imposed Russian regulations, Ukraine is searching for alternatives, and the Trans-Caspian route is at the top of the list.

This route will take Ukrainian goods through Georgia and Azerbaijan, through the Caspian Sea, to Kazakhstan and China.

Trials for shipping goods on container trains through this route are expected to commence on January 15, and this is the very same route that Turkey is actively promoting through its “Middle Corridor” project.

An agreement signed last November between Turkey and China aims to harmonize the One Belt, One Road Project with the Trans-Caspian and infrastructure development within this framework will bring about better alternatives for Ukraine, i.e. alternatives bypassing Russia.

Having a common adversary in Russia, as well as being disappointed from their pursuit of European integration in their own ways, Turkey and Ukraine are getting closer to each other, building on their already favorable ties.

Stronger economic relations through larger trade volumes and more mutual investment will be needed to solidify the foundation of this emerging alliance, because shared ill feeling towards third parties can only take the relationship to a certain distance, not more.