January 07, 2016
KIEV, Ukraine -- Ukrainian social media users have called for a boycott of Coca-Cola after it posted a festive map of Russia that included Crimea. 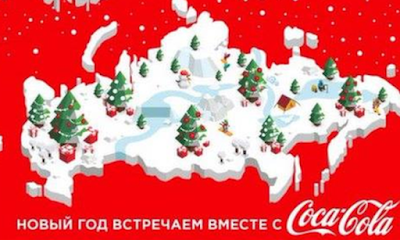 Coca-Cola republished the map to include Crimea following complaints from Russians.

The company originally posted a map that excluded the annexed peninsula, but backtracked when it received protest from Russians.

It quickly republished the photo to include Crimea, only for Ukrainians to threaten to boycott the company.

Coca-Cola has now removed the image altogether and apologized.

In a statement released on Wednesday, the US drinks manufacturer said it did not "support any political movements", adding:

"The company has removed the post and apologises for the situation that occurred."

The US embassy in Ukraine had earlier condemned the inclusion of Crimea, saying in an online statement:

"Coca-Cola's actions violate the official US position condemning Russia's illegal occupation of Crimea, which is and has always been an integral part of Ukraine."

Coca-Cola posted the original message on VK, Russia's biggest social network, on 30 December, with the caption:

Following condemnation from Russians, it republished the image to include Crimea and went further, including the Kuril Islands - seized by Russia shortly before Japan's surrender in World War Two in 1945 - and Kaliningrad, a Russian exclave annexed from Germany in the same year.

Ukrainians were quick to respond on social media, with many using the hashtag "#BanColaCola".

"All countries which are the main market of Coca Cola like the European Union, the United States, they actually (are) recognising Crimea as a part of Ukraine and they've put sanctions against Russia.

Oleh Lyashko, a populist Ukrainian politician, vowed that he would "never ever in (his) life drink Coca-Cola again".

He also posted an edited image of the Coca-Cola poster, with the words "Betrayal" replacing the brand's name.

Crimea was taken over by Russia in 2014 following months of protests that led to the downfall of Ukraine's pro-Moscow President Viktor Yanukovych.

The majority of Crimea's 2.3 million population identify as Russians and speak Russian.

The EU and US condemned the annexation of Crimea and announced travel bans and asset freezes against a number of Russian and Ukrainian officials.