US VP Biden Heads To Ukraine To Stress Continued Support 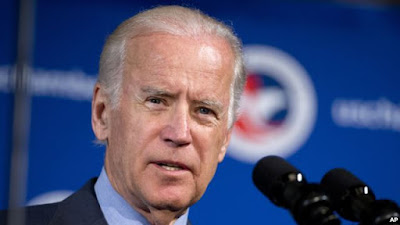 Vice President Joe Biden speaks at the first U.S.-Ukraine Business Forum co-hosted by the U.S. Chamber of Commerce and the Commerce Department in Washington, DC.

Biden, making his fifth visit to Ukraine as vice president, plans to arrive in Kiev late Sunday evening for a series of appointments early in the week.

On Monday, he’ll meet separately with President Petro Poroshenko and Prime Minister Arseniy Yatsenyuk, as well as at a roundtable with civil society activists and other reformers.

Speech to lawmakers Biden also is scheduled to speak Tuesday to the Rada, or congress, a rare opportunity for a foreign leader.

He’s likely to press upon legislators that they “have a special obligation to keep Ukraine moving forward,” a senior administration official said in a telephone briefing Wednesday with reporters.

A major point of discussion will be how to ensure that “Russia and the separatists live up to their obligations under the Minsk Agreement,” the official said.

The pact, reached in February, was meant to de-escalate hostilities in the east.

While violence between Ukrainian government troops and pro-Russia separatists “has decreased somewhat in recent months,” it continues to flare up, the official said.

The United Nations estimated that over 8,000 civilians and soldiers had been killed as of this fall.

Talks with Poroshenko and Yatsenyuk are expected to focus on “what additional economic, governance and rule-of-law reforms are necessary,” the official said.

The United States has provided $450 million in direct assistance to Ukraine this year, of which more than half is for security, the official said.

Biden’s trip comes after last month’s two-year anniversary of the start of the Maidan uprising, in which public protests in Kiev for closer ties with Europe eventually forced Russia-leaning President Viktor Yanukovych from office and opened the door for more democratic reforms.

The vice president “will emphasize the need to implement recently passed anti-corruption reforms,” the official said.

Ukraine has set up a special prosecutor’s office for fighting corruption, but the Obama administration previously has said the prosecutor general’s office itself needs reform.

Administration officials also said the vice president would emphasize that the United States continues “to oppose Russia’s attempted annexation of Crimea” in March 2014.

He’s also expected to reassure Ukraine that, though the United States is communicating with Russia about the crisis in Syria, it hasn’t softened in its assessment of Russia has crossed the line in Ukraine.

“Nothing in our conversations with Syria impact our assessment that Russia continues to be the aggressor in Ukraine,” the official said. “… Nothing that’s going on in the Middle East has changed one iota of our commitment to the Ukrainian people and to their security.”