December 10, 2015
KIEV, Ukraine -- Over 9,000 people have been killed in Eastern Ukraine since the beginning of conflict in the region in April last year, according to a new report released Wednesday by the U.N. High Commissioner for Human Rights. 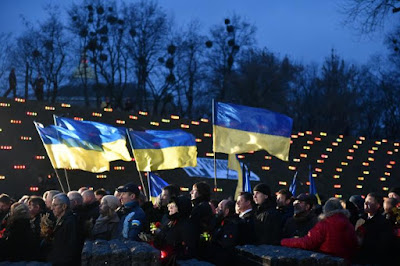 A report by the United Nations released Wednesday said that over 9,000 people had been killed in violence in the eastern part of the country. In this photo, people hold candles during a ceremony in memory of the victims at the Holodomor famine memorial in Kiev, Nov. 28, 2015.

In the May-August period, the organization reported 413 civilian casualties that comprised of 105 deaths and 308 injured.

"After more than 9,000 people have lost their lives, the reduction in hostilities, and thus in new casualties, is very welcome," said U.N. human rights chief Zeid Raad al-Hussein, according to the Associated Press (AP), adding:

"I urge all sides to fully implement the Minsk agreements and to actively work to ensure the application of the rule of law and international human rights norms everywhere in Ukraine."

Clashes in Eastern Ukraine have been ongoing between pro-Russian rebels demanding secession and government forces.

Overall, 9,198 people have been killed and more than 20,000 people have been injured in fighting, up from 7,883 deaths and 17,610 injured recorded in the previous quarterly report released in September.

"This increase of almost 1,200 killed and over 3,000 injured is because of the counting that is made by official authorities, especially the Ministry of Defense and the Ministry of Interior," said Gianni Magazzeni, a senior U.N. official involved in the report, according to the AP, adding:

"We tried to bring the figures ... in line with available information at the present time."

The report also found that 52 percent of civilian casualties were caused by “explosive remnants of war and improvised explosive devices.”

About 2.9 million people living in the region still face difficulties, and most of them have to rely upon humanitarian help, the report added.

"There remain a large number of unidentified bodies in morgues, in multiple places, especially in the areas controlled by armed groups," Magazzeni said.

Moreover, the report warned that clashes along the border in November raised fears that shelling in the region may resume again.

Magazzeni said that since Nov. 15, the cutoff date for the report, six people have been killed and 21 have been injured.

Ukraine is supported by Western powers, including the U.S., Canada and the European Union, who have condemned Russia for annexing Crimea last year.

The U.N. has also previously alleged that the rebels were being funded by Russia.