December 04, 2015
KIEV, Ukraine -- With only half the country’s children vaccinated, it was inevitable that something like this would happen in Ukraine. 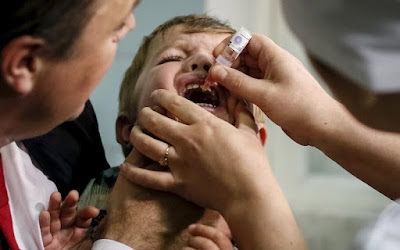 Ukraine is back in the news, but this time it is not for deepening tensions with Russia or for the latest on its newly deposed heavyweight boxing champ, Wladimir Klitschko.

The headlines this go-around are perhaps the most alarming of all—Ukraine has reported two cases of polio, the first by a European country since 2010.

Dispatches from the Global Polio Eradication Initiativez and the World Health Organization describe two cases of polio occurring in children—ages 10 months and four years—from the southwest part of Ukraine.

The cases were found in the summer and are now being reported to promote a large vaccine campaign for millions of Ukrainian children.

According to WHO, only half of the children in Ukraine have received the polio vaccine (or vaccines against anything for that matter), making the quiet and methodical vaccine catch-up a screaming necessity.

Just two cases might seem like a paltry number, unworthy of the all hands on deck WHO response.

But consider the math behind the disease. Of 100 people who are susceptible and then become infected with polio, only one (or actually 0.5) develops clinical polio with neurologic symptoms.

The other 99 or 99.5 have a day of a stomachache and perhaps a fever, then live happily ever after.

And hundreds of new infections of polio anywhere anytime is a public health calamity.

So the broad scale vaccine campaign has begun.

But there is a bitter irony to this strategy, one beloved by the anti-vaxx crowd: the current Ukrainian cases have been caused by vaccine itself.

Like any living virus it may acquire genetic elements that can alter its aggressiveness, resulting in so-called circulating vaccine-derived poliovirus or cVDPV.

Right now, two countries in the world, Afghanistan and Pakistan, have ongoing transmission of wild poliovirus, while cases in other areas, including Guinea, Madagascar, and Nigeria, are from the cVDPV.

This is the cruel cost of preventing polio—rare but real cases of vaccine-associated disease.

A related phenomenon affected Jenna Bush’s father-in-law, John Hager, who in the 1970s developed paralysis from attenuated polio after his infant son received the vaccine.

Though a manmade disease, cVDPV causes symptoms only in those who have not been vaccinated by standard Sabin attenuated vaccine.

In other words, the two kids in Ukraine developed the disease because the public health system failed to vaccinate them.

The current intervention of 5 or 6 million vaccines is likely to be effective and this small outbreak nipped in the bud.

The vaccine is rapidly effective and the lack of additional known cases over the last few months, suggest a contained problem.

But the problem is not the two cases of polio, though each is its own tragedy for the families involved.

The real problem—the problem that makes public health authorities gasp—is that a European country, or any country in the 21st century, has allowed half its kids to go without appropriate vaccine coverage.

This is unlikely to be the result of a bad year or a direct consequence of the several-year long high-wire act the country is playing out with Putin, et al.

After all, the debacle with Crimea started about two years ago—yet a four-year-old child, one who should have received the vaccine three or four years ago, has developed now polio.

To have coverage this pathetic for this long, a public health infrastructure this lame, takes years and years of governmental neglect for the safety and well being of its citizens.

We saw a similar moment after the Iron Curtain fell, though then it was diphtheria, not polio, that was resurgent across the briefly dubbed NIS—New Independent States, then with equal brevity, the CIS, or Commonwealth of Independent States—the placeholder terms for the Soviet states that broke off into sovereignty in the years that followed.

At that time, a broken health care system was unsurprising—the USSR had been wheezing its last and it made sense, sort of, that resources for preventative care, including vaccine programs, would be among the first things to be cut.

But this is now, 21st century modern Europe with all the 2000s had to promise for Central Europe—growth, equity, robust coast-to-coast Merkelism where old school hard work and craftsmanship were cashed in to EU entry and, eventually, the prize of prizes, life on the Euro, leaving the hryvnia happily in the dust.

Instead though, they are eyeball deep in a polio outbreak that reflects a completely broken public health system, one that likely is so non-functional that it is unable to measure just how lousy it is.

A function of public health, after all, is not only to prevent but to count cases, so that assessments about interventions can be made.

It would not be surprising if many other vaccine-preventable infections were moving through Ukraine but that polio, being clinically dramatic and the nightmare of every parent, stood out and drew international attention.