December 11, 2015
KIEV, Ukraine -- Ukraine's security service said on Thursday that it had arrested an insurgent group involving three Russian nationals that had stockpiled bombs and planned to carry out "terrorist attacks", in raids that cost the life of a special forces officer. 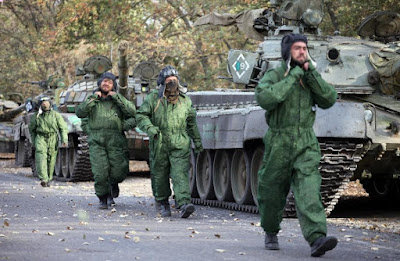 Pro-Russian separatists soldiers withdraw their tanks from positions near the town of Novoazovsk in the Donetsk region on October 21, 2015.

The SBU security service claimed Moscow -- accused by Kiev and the west of fuelling a pro-Russian insurgency in east Ukraine -- was changing tack as fighting abates, seeking to destabilise the country elsewhere in what it called a "transformation of Russian aggression".

Ukrainian President Petro Poroshenko paid tribute to the officer with the elite Alfa special services who perished in the raids, Andriy Kuzmenko, saying he helped prevent further "chaos and anarchy" in the country.

"The insurgents planned to stage terrorist acts in Kiev and Kharkiv to destabilise the situation in the country," said SBU spokeswoman Olena Hitlyanska, referring to the capital and an industrial city in the northeast.

The leader of the insurgent group was also killed after opening fire during the raids, which took place in Kiev and Kharkiv late Wednesday and early Thursday, Hitlyanska said on Facebook.

Another special forces officer was wounded but his condition was stable, she said.

"In one apartment alone, where active resistance was put up and where the leader of the insurgent group was liquidated, eight improvised explosive devices were found," SBU official Oleksandr Tkachuk told reporters.

"The Russian nationals were detained in another apartment. Twenty-three more explosive devices were found there," he said.

Tkachuk did not rule out that the detained Russian nationals were linked to Russian special services and accused Moscow of seeking to destabilise Ukraine's "peaceful cities".

President Vladimir Putin's spokesman Dmitry Peskov told reporters on Thursday he did not have any details about the reported raids in Ukraine.

Kiev and the West have accused Russia of sending troops across the border in an alleged attempt to boost the insurgency, claims Moscow denies.

The UN on Wednesday hailed a "sharp de-escalation of hostilities" in eastern Ukraine since the warring sides signed a new truce on September 1, in a conflict that has claimed more than 9,100 lives since April 2014.

Nevertheless, officials reported Thursday that over the past 24 hours two Ukrainian soldiers were killed and ten more wounded in fresh violence that included clashes between government forces and rebels, in a new breach of the fragile ceasefire.

"The situation around Donetsk airport remains very complicated," Kiev spokesman Oleksandr Motuzyanyk said, adding the soldiers died and seven others were injured when a landmine exploded near the rebel stronghold of Donetsk.

The other three soldiers were hurt in clashes with rebels.

Motuzyanyk added that rebels also fired four rockets at the village of Kurakhivka, some 12 kilometres (7.5 miles) from the frontline.

Separatist authorities for their part accused the Ukrainian army of breaching the truce nine times, said the rebels' mouthpiece, the DAN news agency.

"Areas in and around Donetsk airport" remain the epicentre, he told journalists via Skype from eastern Ukraine.