December 06, 2015
KIEV, Ukraine -- Ukraine got rid of its nuclea aresenal, but guarantees of Ukrainian sovereignty were ignored. 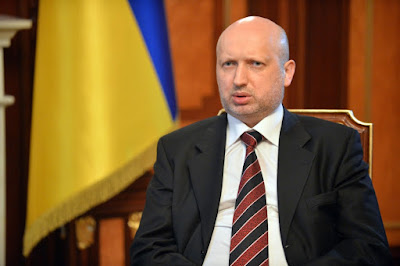 Ukraine was then a young independent state that was pursuaded to give up its nuclear arsenal in exchange for security guarantees from Russia, the United States, the UK, France and China.

Turchynov said Ukraine's political leadership then believed in efficacy of international safeguards and guarantees, which ultimately proved to be worthless.

"We were stripped not only of nuclear weapons, but of all carriers which would carry not only nuclear warheads. Our missile pits were blown up, rocket fuel disposed of, control centres destroyed. Ukraine lost its strategic bombers and cruise missiles, which are being used by the Russian military in Syria," Turchynov said.

Turchynov said leaders of the US, UK and France were unable or unwilling to prevent Russia from invading east Ukraine in early 2014, despite guarantees in the memorandum.

"They politely told us that the Budapest Memorandum is just a formal document, it does not envisage any real tools for fulfilling guarantees. Well, Ukraine was really disarmed, but the guarantees were conditional," said Turchynov.

The NSDC secretary said that the Budapest Memorandum failure "proves the futility of disarmament, illustrates a complete destruction of the collective security system, and turns the new century paradigm into the medieval 'rule of force' format, creating a potential threat to the world."

Unknown said…
The Ukrainian government was, of course, naive in trusting the U.S., England, France, or any other country or combination of countries with its national security. That naivete was reflected in its willingness to sign a Memorandum, rather than a formal,binding and enforceable agreement before giving up its nuclear arms. In fact, Bill Clinton was so anxious to deprive Ukraine of its nuclear arms (to take political credit for a major disarmament success), that it is very likely that Ukraine could have succeeded in becoming a NATO member in exchange for its nukes.

But the Clinton Administration also showed bad faith because its officials knew that Ukraine, having only 5 years earlier assumed its own handling of diplomatic affairs, was at a huge disadvantage in understanding all the protocols, nuances, and forms of international treaties and agreements. They knew that Ukrainians fully trusted the signatories and understood the language of the Memorandum to be both clear, in plain language, and binding on all parties.

But let us give Bill Clinton and his State Department the benefit of the doubt and assume that if the invasion of Ukraine had occurred during his administration, he would have taken a much tougher stance to honor his commitment, and Ukrainians would not now be concerned with the nuanced differences between "lethal" and "non lethal" defensive weapons or shifting through U.S. "military aid" that includes equipment that may have been recovered from a Pentagon junk yard.

So who would we blame for "losing Ukraine" if that tragedy should ever occur? Well, let's take a look at Obama and his record. Back in 2005, only a mere 7 months after he became senator, he took the time to travel to Ukraine with Sen. Lugar to look at Ukraine's weapons stockpiles.

They persuaded then President Yushchenko to destroy tons of ammunition and stockpiles crucial to keeping a standing army battle-ready. The U.S. paid for the destruction of 400,000 small arms, 1,000 anti-aircraft missiles, and more than 15,000 tons of ammo. And, indeed, why did Ukraine need all of that.....it had a U.S. president's signature on a memorandum that if ever anybody threatened Ukraine, the U.S and England would come to its defense? Surely, you could take that to the bank...if you can't trust the U.S., then who can you trust?

Then, 5 years later - on April 12, 2010 - Obama had a meeting with then President Yanukovych at the White House. Obama was very much interested in having Ukraine give up its highly -enriched uranium (just in case Ukraine decided that it had made a raw deal with the prior U.S. president?) Yanukovych agreed, and the White House calmed any qualms Ukrainians may have had by issuing a press release that President Obama "reconfirmed that the security assurances recorded in the Budapest Memorandum...remain in effect".

So there you have it. Pres Obama was no longer the unhappy recipient of commitments to which he was not a party, but those commitments are now his. And how has he honored his early efforts to further disarm Ukraine of conventional arms and his later assurances of Ukraine's territorial integrity and independence? Well...you know the rest of the story. He has blocked every effort and appeal by his own National Security and Pentagon staff and by Congress to give Ukraine the means to - at least - defend itself.

I think if the Vice President brought just one javelin anti-tank missile with him in his diplomatic pouch, that would make a stronger statement (and be more persuasive to Putin) than assurances that the U.S. "has Ukraine's back".

Unknown said…
PS- Mr President: The Vice President's visit to Ukraine this week is an ideal opportunity for you to demonstrate that your word is your bond. Do NOT let Ukraine fight a world superpower with one hand tied behind its back. Ukraine's fight is not only its fight but it is the civilized world's fight. If Russia succeeds - once again - to grab the land of its neighbors and violate the whole international order that you have so often held up as a model, then your legacy of 8 years will have been shown to be empty rhetoric.

Putin has done everything possible to humiliate and denigrate you - both personally and as the US president. Ukraine is where it has to stop. Send Ukraine the arms it desperately needs, provide it the funds needed to relieve the suffering of its distressed population, and double down on the pressure to cleanse the country of corruption and bring in effective and compassionate governance.
8:21 PM

Unknown said…
I deeply disrespect Barack Obama and I will teach my children to remember Obama as a disgrace to American values. Obama do not deserve to be called President or even a Mr. he is some thing else.
1:42 AM