December 05, 2015
KIEV, Ukraine -- An electricity blackout in Russian-occupied Crimea, caused by the demolition of electricity connections between Kherson oblast and Crimea started a standoff, which to the outside world looked like a planned trade war between the Ukrainian government and Russia. 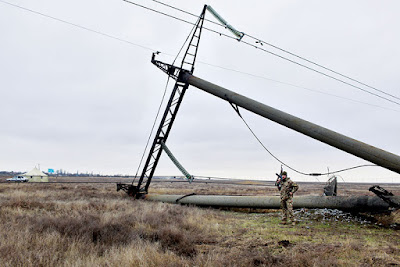 A Crimea blockade activist armed with a machine gun stands near a downed electricity line near Chonhar, about five kilometers from Russian checkpoints.

In fact, it is a domestic policy issue, as frustration is mounting in Ukraine over its inability to stop Russia from humiliating the country on various fronts.

The recent exchange started with Tatar activists setting up an improvised blockade of Crimea about one month ago.

Most of the activists have fled from Crimea, where the Tatar minority faces systematic repression, marginalisation, and discrimination by the new Russian authorities.

After Russia intentionally humiliated Ukraine by handing out long prison sentences to Ukrainian film-makers Oleh Sentsov and Oleksandr Kolchenko for “terrorism” and extending the show trials against Nadiya Savchenko, the mood against Russia reached new levels in Ukraine.

The “blockade force” received support and reinforcement from Pravij Sektor and Azov battalion veterans, who were released from military duty after the September ceasefire.

The blockade received little international attention until, on 20 November, activists – most likely veterans from those two battalions – blew up power lines and electrical infrastructure delivering electricity to Crimea (and large parts of the Kherson oblast), causing a blackout on Crimea.

The initial response of the government was as expected: two National Guard battalions and repair troops were sent to the site on 22 November to repair the lines.

But after initial encounters with the blockade activists, public opinion turned in favour of the blockaders, portraying them as patriots who have not given up on Crimea.

Trying to capitalise on the public sentiment, the government jumped on the idea of a blockade.

Prime minister Yatseniuk, whose approval ratings have plummeted to single digits this summer, took the lead with a hawkish position on Crimea.

An investigation into the Chinese company laying a power cable from Russia to Crimea has reinforced the impression that the blockade is now official policy.

While Ukraine certainly has reasons to point at Russia’s misbehaviour on Crimea, the problem with Ukraine's response is that decisions were taken that legitimised facts created on the ground by non-state armed actors.

This is a worrying sign, and plays perfectly into the hands of Russian propaganda, which claims that radicals are running the show in Ukraine.

If a blockade policy had been set up as an immediate reaction to the annexation in March 2014, the issue would be a different matter.

But raising the blockade now, and on these terms, is a strategic mistake.

In Europe, this Ukrainian blunder comes at a time where Putin-appeasers are trying to advance their agenda following the Paris attacks and the Russian intervention in Syria.

And Europe cannot and will not back a policy that was conceived by militiamen on the ground.

The first Russian counter-move was to suspend the delivery of gas, coal, and nuclear fuel to Ukraine.

The gas issue is actually the least dangerous part.

Ukraine has very large storage facilities, and reverse-flow agreements with Slovakia and Poland.

If the winter is mild, Ukraine won't need Russian gas at all.

However, if the winter turns out to be harsh, problems will arise.

With coal the issue is trickier. Ukraine has reserves for 35 days of full winter-load consumption for its power stations.

This is not that much.

Ukrainian power stations are designed to handle the black coal from the Donbass, and similar imported coal from Russia and it is not that easy to substitute Donbass coal with other brands.

Ukrainian operators have for this reason declined Polish offers of Silesian coal before.

If winter hits hard, 35 days reserve will not be enough.

But the ongoing trade-war will make it more difficult for Kiev to re-negotiate deliveries, especially in the face of the urgency of a cold winter.

This token has now used for populism, just before winter hits.

And worse, this is done in a way that can only scare off European supporters.

Ukraine will not necessarily be able to count on the West when its energy sector is hit next time.

But Europe should not lose patience with Ukraine just yet.

There actually were constructive elements in Ukraine's political spectrum.

President Poroshenko called for the Minsk contact group to engage with the Crimea issue in an attempt to elevate the issue to the level of foreign policy and stop the domestically driven race towards new escalation.

But as Crimea is not part of the Minsk agreement and Russia considers the annexation as non-negotiable, this will be hard to achieve, nevertheless, the West’s pledge that the first annexation by force in Europe since the Second World War will not be accepted should be reinforced by pushing Russia towards just such a contact group.

There are negotiation formats for each disputed territorial issue in Europe – except Crimea.

Europe should put Russia under stronger pressure on the Crimean Tatars and the political show trials.

Systematic repression against Tatars, opposition members, and independent journalists in Crimea has reached levels unprecedented since glasnost and perestroika.

Russia is, at least on paper, a member of the Council of Europe and not reacting to its repressive misdemeanors will deprive this institution of any remaining credibility.

Furthermore, the EU could expand its sanctions list on those people responsible or complicit with actions cited above.

At the moment, only 157 individuals are on this list and few of them are participating in the occupation-regime on Crimea.

To be frank, the actual potential to influence Russia is severely limited.

Russia treats the issue of Crimea as a matter of national survival: military means are off the table, and Russia has shown no sign of reacting to economic pressure on Crimea.

So negotiations will not take place before the collapse of the Putin regime.