December 17, 2015
KIEV, Ukraine -- Ukraine's central bank may rank among the worst in achieving sound money this year, but at least it finally got out of the furniture business. 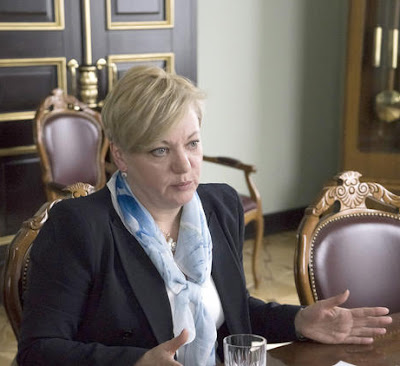 Valeriya Hontareva, governor of the National Bank of Ukraine, during an interview at the bank's headquarters in Kiev in March. Lost among the 12,000 workers she inherited when she became the country's fourth central bank governor in 18 months last year were dozens of artisans making products such as wheeled shelves and armored doors at a building the bank owns on the outskirts of Kiev.

Lost among the 12,000 workers Valeriya Hontareva inherited when she became the country's fourth central bank governor in 18 months last year were dozens of artisans making products such as wheeled shelves and armored doors at a building the bank owns on the outskirts of Kiev.

"We found a maintenance unit costing us $260,000 a year," Deputy Governor Vladyslav Rashkovan said by email.

"Actually, it was kind of a separate enterprise employing 65 people. They were all fired."

It's a story being repeated across the swollen bureaucracy of a country ranked Europe's most corrupt by Transparency International.

President Petro Poroshenko and Prime Minister Arseniy Yatsenyuk are racing to cull payrolls by the tens of thousands to meet International Monetary Fund demands for spending curbs and keep a $17.5 billion bailout alive.

Vice President Joe Biden, one of Ukraine's most vocal supporters, flew to Kiev last week to urge the country's leadership to redouble their efforts against corruption.

Ukraine had about 335,000 civil servants at the beginning of last year, almost triple the number in neighboring Poland, where the economy is four times bigger and the pay is multiple times higher.

Finance Minister Natalie Jaresko said last week she aims to cut that ratio to 41 percent in 2016, a task made even harder by the 7 percent contraction of the economy in the third quarter, the most among those tracked by Bloomberg.

"The most terrifying words in the English language are 'I'm from the government and I'm here to help,"' Economy Minister Aivaras Abromavicius said, channeling Ronald Reagan in assessing the scope of the problem.

Tackling the twin curses of bloat and graft are existential issues for the fraying, U.S.- and European Union-backed coalition, which is mired in corruption scandals and facing opposition calls for fresh elections.

Yatsenyuk, the prime minister, was physically attacked in parliament on Friday by a member of Poroshenko's faction, triggering a fistfight among lawmakers.

Support for his People's Front is virtually nonexistent, 1.3 percent, compared with 22 percent in last year's election, according to a September survey by the International Institute of Sociology in Kiev.

Ukrainians are so disillusioned with their leaders that even after Vladimir Putin annexed Crimea and stoked a rebellion that's left 9,100 dead, the vast majority see the government in Kiev as a threat equal to or greater than the one in Moscow, a Razumkov Center poll found.

Thirty percent said graft and "inefficient authorities" are the biggest danger to the country, while 47 percent put those issues on par with Putin.

The problem isn't just that there are too many people in a position to extract bribes, it's that they aren't paid enough to stop them from seeking other income, according to Roman Nasirov, who runs the sprawling State Tax Service.

Nasirov said he's in the process of firing 17,000 people to cut his workforce by 30 percent so he can give everyone else a 40 percent raise.

The Interior Ministry, one of the largest employers in Ukraine, has already axed 23,000 jobs and that was just 14 percent of its staff, according to watchdog VoxUkraine.

The central bank said Wednesday its headcount was down to 6,300 on Dec. 1 and it plans to cut that by another 1,200 by year-end.

"It's very difficult to fight predatory behavior or petty corruption when our regional tax and customs officers are paid 2,500 to 3,000 hryvnia ($105 to $127) a month," Nasirov said.

By that logic, members of parliament would pay themselves enough to live within their official means, but the opposite is happening.

In a populist move to quell public outrage over corruption, lawmakers voted to slash and level salaries to about 6,000 hryvnia ($255) a month, less than it costs to rent a studio apartment near parliament.

The president only makes about 9,300 hryvnia ($395) a month, according to Radio Liberty.

Infrastructure Minister Andriy Pyvovarskyi, a former oil executive, was among the hundreds of patriotic Ukrainians who left private-sector jobs to join the government after Yanukovych's downfall.

Many have quit due to broken pledges of higher pay.

"It's ridiculous," Pyvovarskyi, 37, said in an interview before he submitted his resignation in protest of the wage issue on Friday.

This is a true tragedy."