December 12, 2015
KIEV, Ukraine -- Putin has deployed an extra 20,000 soldiers to the frontline of Ukraine’s civil war, as temperatures and hopes of a lasting ceasefire continue to plummet. 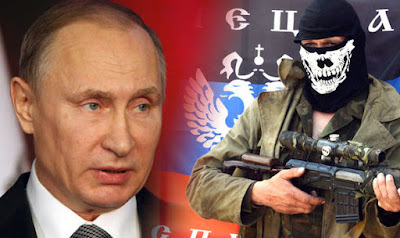 The fresh deployment takes the number of Russian troops in the region to around 30,000 [corrected estimate] - a move Ukraine’s president described as blatant “aggression” aimed at causing further unrest.

The fighting force is stationed in the east of the war-scarred country, where fierce battles between government backed rebels and Russian-backed separatists have claimed the lives of more than 9,100 in the 20-month long conflict.

Petro Poroshenko attacked the Kremlin for using bombing raids in Syria as cover to “divert the world’s attention from ongoing aggression in Ukraine”.

Meanwhile, US Vice President Joe Biden warned Russia that Western pressure on Moscow would only increase if Russian "aggression" against neighbouring Ukraine continued.

During a visit to Kiev, he said: "If Russian aggression persists, the cost imposed on Moscow will continue to rise."

Russia annexed Ukraine's Crimea peninsula in March 2014 and has been accused of sending pro-Kremlin fighters to carve out their own region in the ex-Soviet state.

As a result, the Kremlin has been hit with economic sanctions from Western powers angry at the incursion.

The EU said earlier that it planned to extend sanctions next week before EU member states' leaders meet in Brussels on December 17-18 for their last summit of 2015.

But Moscow continually lies and denies all involvement in the conflict and has banned imports of Western food in response.

After 20 months of intense fighting between Ukrainian military and Russian-backed armed groups, 9,115 people have been killed and 20,797 injured, with civilians among the dead and wounded.

A report by the office of the UN High Commissioner for Human Rights said killings and torture remained commonplace.

Investigators found a steady flow of "ammunition, weaponry and fighters from the Russian Federation" were combing to create "highly flammable" situation in the war-ravaged country, but they added that there were tentative signs of a deescalation in the conflict.

The deployment comes as Ukraine’s security service said yesterday it had arrested an extremist cell involving three Russian nationals that had stockpiled bombs and planned to carry out "terrorist attacks”.

“The insurgents planned to stage terrorist acts in Kiev and Kharkiv to destabilise the situation in the country.”