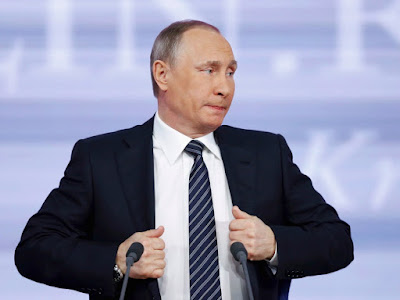 "We never said there were no people there who were carrying out certain tasks," Putin said during his annual end-of-year news conference in Moscow.

Putin said Russia had no regular troop presence in eastern Ukraine but, in response to a question about Russian servicemen detained and injured in the fighting, he admitted that "certain matters, including in the military area" were being performed.

He did not elaborate.

"We are interested in resolving this conflict as soon as possible," Putin said.

NATO Secretary-General Jens Stoltenberg, meeting in Brussels on Thursday with Ukrainian President Petro Poroshenko, said Putin’s admission “is basically the same as we have been stating all along.”

“He said that Russia has personnel in eastern Ukraine and this personnel, they have conducted military activities. That is what we normally call ‘soldiers,’” Stoltenberg said.

Putin’s admission “underlines the special responsibility of Russia when it comes to the full implementation of the Minsk agreement,” he said.

That cease-fire agreement, reached in the Belarus capital, calls for the withdrawal of heavy weapons, the withdrawal of foreign troops (in this case Russia’s), ending hostilities, changes to Ukrainian law and local elections in separatist-held eastern Ukraine.

Putin called for implementation of the Minsk agreement, adding that “we are not interested in exacerbating the conflict.”

"If we really want to resolve the problem, let’s stop this, let’s work together," he said.

"And we are willing to influence people in the southeast of the country and persuade them to accept a compromise. We are willing and we want it to happen, but we need our partners in Kiev to be willing as well.”

The fighting in eastern Ukraine began in April 2014 after popular protests in the Ukrainian capital, Kiev, ousted a pro-Russian president and installed a new government that has sought to improve ties with the West.

The U.S. government, NATO and non-governmental observer organizations have cited evidence that the weapons were supplied by Russia and that Moscow also sent troops to help the rebels.

An estimated 9,100 people have been killed and more than 1.3 million displaced as a result of the conflict, according to the State Department and United Nations.

Russia’s economy is expected to contract by 3.8% in 2015 due to low oil prices and European Union sanctions over its intervention in Ukraine.

Putin’s comment Thursday is reminiscent of his admission in March 2014 that he ordered the military operation to seize Ukraine's Crimea province, weeks after denying that soldiers who occupied buildings and set up checkpoints around the region were acting under Russian military orders.

Whether Putin's acknowledgement of Russia's role in eastern Ukraine will lead to greater determination to implement all terms of the Minsk agreement is unclear, but he apparently hoped to signal that he will cooperate, said John Herbst, a former U.S. ambassador to Ukraine who’s now at the Atlantic Council think tank in Washington.

“My guess is the pain Russia has experienced between oil prices and sanctions and the fact that they’re not doing that well in Ukraine has persuaded them to be more reasonable,” he said.

Ivo Daalder, a former U.S. ambassador to NATO who is now president of the Chicago Council on Global Affairs, said there's a more ominous message in Putin's words.

It's "an admission of the violation of international law," Daalder said.

"It sends a message to Kiev that he doesn't care anymore that the international community knows."