December 05, 2015
YAVORIV, Ukraine -- As some 300 U.S. soldiers train Ukrainian soldiers at a compound in western Ukraine, the Pentagon is countering reports of old and dilapidated U.S. equipment being given to Ukrainian fighters in the country’s east. 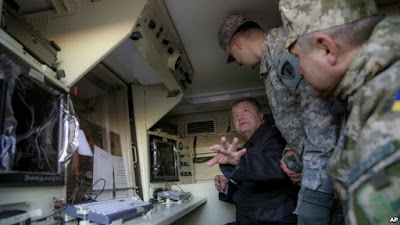 The Pentagon, which has committed more than $265 million in security assistance to Ukraine since the fighting began, says U.S. assistance and equipment has made an “important impact on operational effectiveness.”

“We provide Ukraine with the best possible equipment, taking into account available resources and the urgency with which the items are needed,” Pentagon spokesman Navy Captain Jeff Davis wrote to VOA on Friday.

The Washington Post reported this week that a Ukrainian special forces unit near the separatist-controlled city of Donetsk was using U.S.-supplied Humvees dating from the late 1980s and early 1990s, based on serial numbers on the vehicles.

Three of the Humvees had plastic doors and windows.

The Post report also said “the low quality of the gear calls into question the U.S. government’s commitment to a war that is entering its second year,” a stark contrast with allegations that Russia keeps separatists in Ukraine’s east well-equipped.

Davis said the “overwhelming majority” of equipment sent to Ukraine had not been previously used by U.S. forces but, because of the urgency of the situation, the U.S. did provide some unarmored vehicles from existing U.S. stock.

“All of these vehicles were in working order when they were delivered to Ukraine,” according to Davis.

The commander who oversees U.S. training operations in western Ukraine, Lieutenant Colonel Nick Ducich, told VOA he was not in the country during the initial equipment delivery, but understood that all equipment given to Ukrainians “is tested and ensured that it is in an operational standard before it’s shipped.”

The Humvees referenced in the Post story might also have been part of the military’s standard program for transferring extra equipment where countries can take U.S. hardware “as is,” said Captain Russell Gordon, the Army public affairs officer at the International Peacekeeping and Security Center in Yavoriv.

Ukrainians have received more than 30 armored Humvees, along with night-vision goggles, tactical radios and advanced radar equipment in the last few months, according to those at Yavoriv.

“In talking with my Ukrainian counterparts and seeing the training here, I know that the Q48 countermortar radar and the Q36 [target acquisition radar] is being effective as far as the training aspect, and the implementation of [equipment] like the Q48 has saved Ukrainian lives,” Ducich said.