December 01, 2015
KIEV, Ukraine -- The United States has delivered more than $260 million in non-lethal military equipment to help the government of Ukraine in its fight against a Russian-backed insurgency, but some of the U.S.-supplied gear meant to protect and transport Ukrainian military forces is little more than junk. 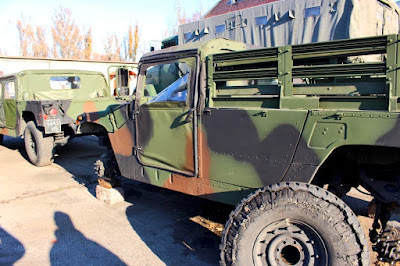 An aging U.S. Humvee with worn out tires near Ukrainian front lines. on Nov. 6.

On the outskirts of the separatist-controlled city of Donetsk, for example, one Ukrainian special forces unit is using U.S.-supplied Humvees dating from the late 1980s and early 1990s, based on serial numbers on the vehicles.

Three of the Humvees had plastic doors and windows — barely any protection at all.

The tires on one of the trucks blew apart after driving only a few hundred kilometers, the result of sitting in a warehouse too long, said one mechanic.

Another infantry unit of approximately 120 men received from the Pentagon a single bulletproof vest — a type that U.S. troops stopped using in combat during the mid-2000s.

“If the Americans are going to send us equipment, don’t send us secondhand stuff,” said one Ukrainian special forces commander, who like other soldiers spoke on condition of anonymity to criticize the condition of his unit’s gear.

The obsolete equipment was identified on a tour near the front lines in eastern Ukraine with help from mechanics serving in the Ukrainian army and through interviews with front-line troops.

In some cases, serial numbers were used to trace the origins of certain vehicles.

Experts said the low quality of the gear also calls into question the U.S. government’s commitment to a war that is entering its second year, with well-equipped Russian-backed separatists still firmly entrenched in Ukraine’s eastern region.

Last month, five Ukrainian soldiers were killed in one day.

“Despite what people think, this is still a war,” a different Ukrainian special forces soldier said.

The Humvees observed near the front of the fighting were part of a batch of about 100 sent to Ukraine earlier this year.

The vehicles were shipped under a special executive power granted by Congress that allows the president to send equipment to foreign countries quickly.

Pentagon spokesman Army Lt. Col Joe Sowers wouldn’t comment directly on the condition of the vehicles but said in an e-mail that the United States has continued to send equipment and provide training “to help Ukraine better monitor and secure its border, operate more safely and effectively, and preserve and enforce its territorial integrity.”

U.S. officials attributed the presence of rundown U.S. defense equipment on Ukraine’s front lines to the need to get equipment to Ukraine quickly at the start of the war.

According to a senior Defense Department official, the United States was wholly unprepared for Russia’s involvement in Ukraine and had to source funds and respond to Ukraine’s requests for aid from a “cold start.”

“We wanted to get things there as fast as possible and we had no money appropriated for this crisis,” said the official, who requested anonymity to discuss sensitive policy issues.

“Does that means everything was perfect? Of course not.”

It is unclear how much of the material sent to Ukraine is secondhand and antiquated.

The U.S. government has also sent new equipment, such as night vision and first-aid kits.

In addition to the dated vehicles already sent, another 100 Humvees of similar vintage have been authorized to be offered for shipment to Ukraine as part of the military’s standard program for transferring extra equipment “as is” to foreign countries.

The program sends “the stuff that’s sitting around somewhere that no service can use,” said an official at the Pentagon who spoke on condition of anonymity to speak frankly about the equipment.

“In some cases Humvees might be provided … for spare parts. They’re not good enough to drive, but you can tear them apart and cannibalize [them].”

In the case of the Humvees in Ukraine, Lt. Col. Andrei, the operations chief of the unit that received the vehicles, said they were supposed to be sent in working order — not stripped for parts.

The cost to purchase a Humvee tire in Ukraine is roughly $1,000, so instead the unit bought a cheap used SUV for a little more than what it would take to replace two Humvee tires.

“Why would I pay to keep replacing tires when I could just buy a car?” asked Andrei, who allowed only his first name to be used to protect his family living in Russian-occupied territory.

The special presidential authority is just one of five Defense and State department programs tapped to supply Ukraine in the months since the start of the conflict.

The Pentagon has also devoted resources to the war by having Army units establish various training programs to boost the fledgling Ukrainian military and its abilities to maintain itself.

To some however, the battered equipment on the war’s front lines is emblematic of a U.S. policy that has done the minimum to bolster the Ukrainian government and deter a reinvigorated Russia.

The only issue, Thornberry added, is that “we can’t make the president deliver it.”

“And it has a broader effect in limiting the Ukrainians’ ability to defend their country.”

When asked about the administration’s goals, a spokesperson for the National Security Council declined to comment on the record.

The current aid policy toward Ukraine is representative of the Obama administration’s desire to “do enough militarily to ensure the Ukrainians can defend their territory,” said Evelyn N. Farkas, the former deputy assistant secretary of defense for Russia/Ukraine/Eurasia.

But she said that more could be done to deter future attacks.

“Right now, considering the stakes, our resources are out of whack,” Farkas said.

She added that a diplomatic solution to the crisis can be reached through stronger engagement — namely in the form of sending weapons to Ukraine.

The White House, though, has resisted sending lethal aid with a belief that sending the weapons to Ukrainian troops would only escalate the conflict, said Farkas.

“This is about our values. This is about the right of Ukraine’s citizens to elect their government and to be fully sovereign and not under Russia’s thumb,” she said.

“We have to take a stand and we have to make sure Ukraine succeeds.”