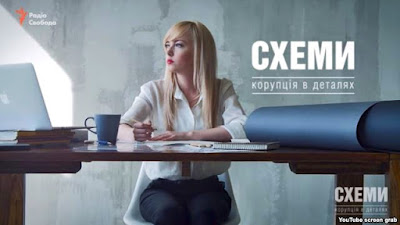 Sometimes it starts with a whistle-blower reaching out to a journalist.

Sometimes what looks like an unremarkable construction site in Kiev turns out to be a black hole of graft and corruption.

And sometimes it takes hours of tedious sifting through public records before the needle in the haystack is found that will lead to a far-reaching investigation and dramatic revelations.

This is how Natalie Sedletska and her colleagues report for the new, internationally recognized investigative journalism television program airing in Ukraine.

It airs nationally in Ukrainian on the UT-1 channel and online.

The show has been viewed by almost 12 million people and is one of UT-1’s top five most-watched programs.

Following the Euro Maidan revolution that saw the ouster of former President Viktor Yanukovich in 2014, Ukrainians have higher expectations for transparency in their society and are frustrated by the continued lack of political will to investigate corruption, says Sedletska.

“In many ways, journalists in Ukraine are filling an institutional gap and are performing the role of law enforcement,” she said.

“We trace ill-gotten wealth, find people on the Interpol wanted list and question them, examine the business practices of oligarchs, and compare the reported assets and salaries with the extravagant lifestyles of officials.”

Ukraine’s National Anti-Corruption Bureau is now reviewing materials gathered by the Schemes investigative team on some 15 cases to determine whether it should take action.

Some of the most prominent Schemes investigations have dealt with the palatial residences of Yanukovich-era oligarchs, questionable land deals involving current President Petro Poroshenko, murky insurance contracts held by the state railway that drove up passenger ticket prices, and an investigation of the head of Ukraine’s traffic police that led to his resignation.

A 2013 Vaclav Havel Journalism Fellow at RFE/RL, Sedletska previously worked as a TV journalist based in Kiev, and was well-known for her investigative journalism.

Reporting from RFE/RL’s Kiev bureau during the Euro Maidan revolution, she met with, photographed, and filmed the demonstrators, giving voice to their aspirations for a transparent civil society with respect for the rule of law.

When Yanukovich fled his lavish residence in February 2014, Sedletska was among the journalists on the scene just hours later who recovered thousands of documents he and his entourage had attempted to destroy.

The documents were published online as the Yanukovich Leaks project, and led to many more investigative reports.

As Ukraine continues to suffer as a result of fighting in the east and an economy in a tailspin, Sedletska says combatting corruption has to remain a top priority for the long-term future of the country.

“Corruption directly robs the nation of its wealth, and therefore undermines the country’s ability to fight the war and economic uncertainty,” she said.

“There will be no investment in a country with such institutionalized corruption, and the youth will have no hope for a dignified life in a country where you have to pay your way for every service and right.”