December 12, 2015
KIEV, Ukraine -- The only applause Vice President Joseph Biden Jr. got while he addressed the Ukrainian Parliament on Tuesday was when he berated Russia. 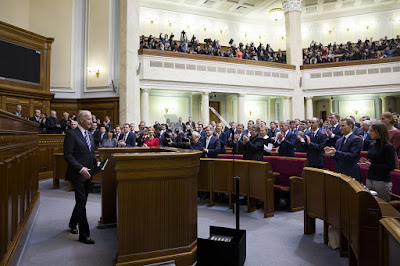 Vice President Joe Biden walks into the session hall to address the the Rada, in the Verkhovna Rada, in Kiev, Ukraine, Dec. 8, 2015.

That’s not hard: Russia’s venality — the seizure of Crimea and the support for separatists in eastern Ukraine — is a strong unifying force in Ukrainian politics.

By contrast, Mr. Biden’s ardent talk of the need to put an end to Ukraine’s ubiquitous corruption and the power of its oligarchs was met with stony silence.

Mr. Biden was right to upbraid Russia and to pledge an extra $190 million in aid to Ukraine.

And as a Western leader who has made Ukraine his special project, he was also right to warn Ukrainian legislators to waste no more time in rooting out corruption.

Though the European Union is likely to renew sanctions against Russia again in January, its patience with Ukraine is being tested by the lack of critical reforms.

In his address, Mr. Biden specifically called for an overhaul of the office of the prosecutor general, changes in the energy sector, transparency about official sources of income and other reforms.

Russia’s actions are no excuse for the failure of democratically elected Ukrainian leaders to crack down on corruption.

About 50 magnates currently own about 85 percent of Ukraine’s gross domestic product, according to the Jamestown Foundation’s Eurasia Daily Monitor.

Many politicians and judges are holdovers from previous governments, mouthing a new line but living by old rules and blocking serious reform measures.

Taking on so well-entrenched a system is a huge challenge.

A measure of President Petro Poroshenko’s weakness against these forces was his having to import foreigners for key jobs, including Mikheil Saakashvili, the former president of Georgia, to be governor of Odessa and David Sakvarelidze, a former Georgian prosecutor, to be Ukraine’s deputy prosecutor general.

Sadly, the credibility of Mr. Biden’s message may be undermined by the association of his son with a Ukrainian natural-gas company, Burisma Holdings, which is owned by a former government official suspected of corrupt practices.

A spokesman for the son, Hunter Biden, argues that he joined the board of Burisma to strengthen its corporate governance.

That may be so.

But Burisma’s owner, Mykola Zlochevsky, has been under investigation in Britain and in Ukraine.

It should be plain to Hunter Biden that any connection with a Ukrainian oligarch damages his father’s efforts to help Ukraine.

This is not a board he should be sitting on.