Is Europe’s Buffer Zone In Ukraine Keeping It Safe?

December 05, 2015
KIEV, Ukraine -- Ukraine must protect civilian populations in the Donbass region and seek a political solution to the conflict. 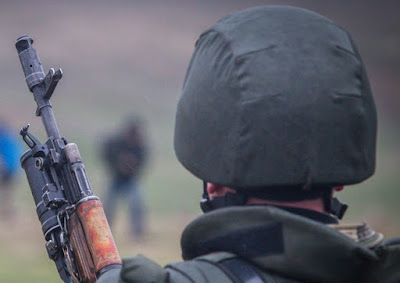 European and American foreign policy elites have come to regard the brutal war in eastern Ukraine almost entirely through the lens of geopolitics.

The terrible human suffering of the war remains an unfocused foreground that they gaze through at a “resurgent Russia,” “Europe in the balance,” “challenges to world order.”

The distorting effect of this distance became visible to the authors of this article, one of whom spent September 25 rubbing elbows with policymakers at the congressional forum, and the other as the guest of a young Ukrainian family on the frontlines of this conflict.

The forum brought together prominent Ukrainian, European and American politicians and activists to advocate for humanitarian, economic and “yes, military aid” as Ukraine gradually recedes from the headlines.

But they were matched by numerous speakers who called for a reignition of the very conflict that has brought that crisis on.

They stated that Ukrainians must be armed for the preservation of European order, because—as former Georgian Ambassador Temuri Yakobashvili put it during a discussion at the forum—“they are the only ones who know how to fight Russians.”

Lest anyone think that a return to armed hostilities might come at too high a cost for the already traumatized country, Ukraine was reminded over and over that the stakes are pan-European, if not global.

“A successful democratic struggle in Ukraine will help revive the democratic spirit in Europe and the United States,” said Carl Gershman, president of the National Endowment for Democracy.

“Ukraine can succeed, and if it does, it will not just be a triumph for the Ukrainian people. It will also make possible a Europe that is whole and free.”

Similarly, General Wesley Clark emphatically stated in his keynote address that “much of mankind’s future is being decided in Ukraine” and “if Ukraine completes this transition to Western democracy … there’s no more war in Europe. Ever. Ever!”

Astonishingly, bellicose statements like those of Yakobashvili and Clark received cheers and applause from the audience.

While these statements may sound like a compliment to the Ukrainian people, this position reduces their country to a buffer zone—a perpetual frontline.

Neither American nor European politicians can afford to tell their domestic audiences that they are not doing enough to stop the Russian aggression (especially given its recent involvement in Syria).

And so to a great extent, Ukraine is expected to be more aggressive in its fight against Russia in order to maintain the illusion that there is still progress in containing Moscow.

And behind the cold, pragmatic concept of a “buffer zone” hides its true meaning: “buffer people.”

It is Ukrainians who are to engage the Russian armed forces with the long-promised advanced weaponry, and Ukrainians who will comprise the entirety of the collateral damage.

While US President Barack Obama vetoed the national defense budget, which included $50 million toward defensive weapons for Ukraine, he announced that Washington would still supply Ukraine with counter-battery radar systems.

And if US officials don’t see provision of radars as potentially escalating the conflict, Russia certainly does—and it already threatened retaliation.

Obama is wise to avoid the more escalatory move.

The cost of a return to full-on war for Ukraine would be untenable.

At the United Nations’ conservative estimate, the war has killed 8,000 people and displaced approximately 1.4 million.

The life-giving mining and industrial sectors of Donbass are ravaged, and the economic crisis induced by the war is spreading that effect far into government-controlled territory.

On the Ground in Donbass

Figures cannot express the full cost of suffering and strife, and the deep alienation in the eastern Ukraine.

One of these authors spent the lovely autumn day of September 25 far from Washington at a young family’s half-finished home on the Donbass frontline.

Denis and Yulia survived the shelling in summer 2014, when the Ukrainian army drove the separatists out of their city.

But that winter, their home was destroyed by a direct hit from separatist artillery, killing both of Yulia’s parents.

They returned, and for months cleared the rubble and planted their garden under intermittent shelling.

Their children learned to identify the sound of different shells as they passed overhead in both directions.

With the help of aid organizations and volunteers, they began rebuilding their shattered home.

Gazing at the cinderblock walls of their house Yulia sighs:

“For me and the kids, this is already happiness. Just give us peace so we can enjoy it!”

Just give us peace.

This is the phrase one hears from so many refugees and frontline civilians in Donbass.

From people like Natasha, who fled the Syrian conflict three years ago (she was married to a Kiev-educated Arab) for the refuge of her parent’s home in Luhansk.

When the city came under fire by the Ukrainian army last spring, she and her children became refugees again, moving to a government-held town across the river, which itself was under constant fire until the guns went silent two months ago.

And now, in the midst of its unaccustomed and fragile silence Natasha, Yulia, Denis and thousands like them are cautiously allowing themselves to hope that this is no mere lull in the fighting, but the end of the war that has overturned their lives.

This is reflected in the falling numbers of internally displaced persons (IDP).

In October, the UN Refugee Agency (UNHCR) reported roughly 1.5 million IDPs in Ukraine; a month later, the number dropped to under 975,000—a staggering 35% decrease.

Encouraged by the reduced fighting, people are returning to their homes.

If their hope is rewarded, and they are not forced to spend another winter hiding from the bombs in freezing basements and root cellars, then it could become a potent force for reconciliation and stabilization in Ukraine.

Treating Ukraine as a shield against Russia, as a “buffer zone,” could mean keeping that country in a near perpetual state of armed conflict and everything that Europe hopes to reduce on its perimeters—instability, poverty and mass refugee flows.

Western leaders should focus on helping Ukraine stave off economic collapse in the east, capitalize on this renewed sense of hope and continue to search nonmilitary solutions.

With the return of civilian populations to Donbass’ conflict zones, the stakes are only getting higher.

The US should increase diplomatic support to resolve the Minsk Agreement’s central quandary: If the so-called people’s republics are to remain in Ukraine, how will they take part in the politics of a country they have recently been in armed conflict with?

Any sustainable resolution is likely prove as messy as the political resolution that ended the fighting in Bosnia 20 years ago.

The horse-trading and gerrymandering of that deal were repugnant, but unquestionably preferable to the fratricide that preceded it.

Stabilizing Donbass will also require Ukraine to rethink its economic blockade of the breakaway regions.

If the artificial internal border between the two halves of Donbass remains a persistent barrier to trade, then both sides are doomed to economic decline.

It is only a question of which sponsor can prop up its Donbass longer.

Even if economic relations in the east are restored, huge injections of foreign aid will still be necessary to prop up the economy of Ukraine proper.

For good measure, the US has committed $2 billion in loan guarantees.

However laudable, this level of financial support is nothing compared to the hundreds of billions the European Union has poured into Greece; and in the words of David R. Cameron, director of Yale’s Program in European Union Studies, Western assistance to Ukraine has been “quite literally, nothing but cheap talk.”

Western leaders should focus on helping Ukraine stave off economic collapse in the east, capitalize on this renewed sense of hope and continue to search nonmilitary solutions.

With the return of civilian populations to Donbass’ conflict zones, the stakes are only getting higher.

No weapon, however precise, will eliminate Ukraine’s enemies, deter Russia or make Europe safer without the political will of the conflicting sides to agree to a peaceful coexistence.

Yakobashvili is right in saying that “a successful Ukraine will be a crucial part of the European and Euro-Atlantic economic and security architecture, and a stimulus for the rest of the post-Soviet region, especially to Russia, to reform and drag themselves out of the swamp of corruption and forced ideologies.”

Ukrainians can be role models for humanism and democracy, and the place to start is in the volatile peripheral zone of the east.

If Ukraine is to become a model and not a cautionary tale, then the West must help it to protect civilian populations in Donbass and seek a political solution to this conflict.